Connect with us
The Foursquare Gospel Church, Alaka branch Lagos, is mourning the death of four f their members who reportedly died in a car accident in the Ojota area of the state. 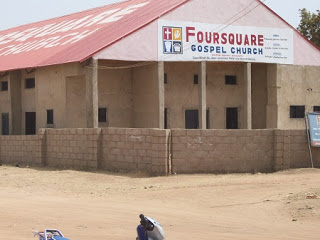 The victims are Temidayo Oyebade, Anuoluwapo Bisade-Philips, Shalom Etiubon and one simply identified as Nike.

While Etiubon is a graduate of Architecture from the Covenant University, Anuoluwapo graduated from the Yaba College of Technology, Lagos.

It was learnt that they were on their way to the 2016 youth convention of the church at the Ajebo camp, on the Lagos – Ibadan Expressway, when the accident happened.

According to The Punch, a member of the church, Victor Udosen, said there were five people in the car.

According to him, the accident took place just by the bridge which links Ojota to the Seven Up Bus Stop.

“They were on their way to the annual youth convention of the church which took place on Saturday at the Ajebo camp of the church on the Lagos/Ibadan Expressway.  I was told that a fast-moving trailer rammed into a car directly behind their car. The car then ran over theirs. Four died while one is in a coma in the hospital,” he said.

A friend of Temidayo, Seye Joseph, also confirmed the death in an interview with The Punch adding that it was unfortunate that Temidayo was no more.

A former pastor of the church, Tolu Boluwatise, took to his Facebook page on Friday to mourn the loss of the youths. Boluwatise described the deaths as painful.

He said, “Death, where is your sting? Every time I remembered Temidayo Oyebade, it was always about when he approached me about how he planned to read the Bible in 2006. He coordinated the youth meeting the last time the Alaka church hosted me.

“Anuoluwapo Bisade-philips had grown to become a young woman. The testimony about her is that she has been active for the Lord. The last time I saw Shalom Etiubon, she introduced herself. I could not recognise her until she reminded me. You all departed suddenly at this time. You left the church and your families in pain without planning it.”

Other Friends of the victims took to their Facebook pages on Saturday to express their grief.

Hakeem Anuoluwapo, a primary school friend of the late Anuoluwapo, wrote, “I can’t believe Anu  Bisade-Philips is gone.  I can’t stop crying. She was a darling back then in primary school. Rest in perfect peace,my cute namesake.

A friend of Temidayo, Adeniji Olasunkanmi, wrote, “It is so unthinkable, unbelievable and unimaginable that Temidayo has left this sinful world. We had a chat on Sunday morning and he asked me about online payment integration and the probability of working together. We love you, but God loves you most.”

WOW! Dad Delivering His Own Twins Will Absolutely Blow You Away [PHOTOS]