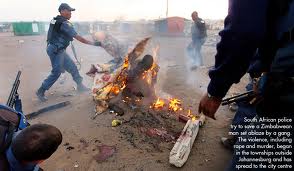 A suspected member of a three-man robbery gang, was, yesterday, burnt to death by a mob in Festca area of Lagos State.

Meanwhile, the Festac police division has arrested two suspected robbers.
The burnt suspect and other fleeing members of his gang reportedly stormed an apartment on 111 Road, where they dispossessed their victim of cash and other valuables.

Luck, however, ran against them following an alarm raised by the victim, which led to their being chased. Unfortunately one of the suspects was nabbed when his colleagues zoomed off in their operational motocycle and left him behind

He was beaten to stupor and set ablaze before the arrival of policemen.

Meanwhile, a member of a two-man robbery gang, who was arrested by the Police, claimed to be a Private in the Nigerian Army. To the amazement of the policemen, he had an identity card belonging to the Military to back his claim.

But when the Divisional Police Officer, Mr Ndabobo Usman, was contacted, he reportedly made some contacts, and it was discovered that the suspect was fake.
Recovered from them, was an operational motorcycle.