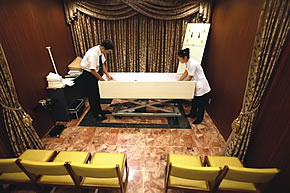 From the picture above, you can see the hoteliers  preparing a ‘room’ for a lodger. The popular belief is
that ‘enjoyment is finished after one is dead. This belief seems to be
antiquated, going by the ingenuity of a businessman in Japan who believes that
the dead should pass on to heaven from a luxurious hotel ! Convinced that the
dead deserve every need to be comfortable, Mr Hisayoshi Teramura; in Yokohama
suburb, has established a hotel, Lastel, purposely to offer hospitality
treatment to the dead.
Hey hey, what will someone not hear in this world, na wa ooo i tire.. pls continue reading for the full article.

﻿
Funny enough, many fun
seekers always stray in, asking for rooms, but Mr. Teramura’s place is neither a
love nest nor a pit stop for tired travellers. The white-and-grey tiled building
is a corpse hotel, its 18 deceased guests tucked up in refrigerated
coffins.
“We tell them we only have cold rooms,” Mr Teramura quipped, when
asked how his staff responded to unwary lovers looking for a room.
According
to National Post, the daily rate at Lastel, as it is known, is ¥12,000
($154.33). For that fee, bereaved families can check in their dead while they
wait their turn in the queue for one of the city’s overworked
crematoriums.
Death is a rare booming market in stagnant Japan and Mr.
Teramura’s new venture is just one example of how businessmen are trying to tap
it.

Mr. Teramura, 71, decided a decade ago to widen his business beyond
graves to funerals and he opened Lastel last year.

Behind its flower boxframed windows, hidden away from
mourners, is an automated storage system. It stores and chills encoffined
corpses, delivering them through hatches and into a viewing room, day or night,
whenever friends and family come to pay their respects.
Building new urban
crematoriums to deal with the surge in bodies is near to impossible because
nobody wants the furnaces in their backyard, explained Mr Teramura. That
not-in-my-backyard crowd is forcing cities to make do with the facilities they
have, even as the body count mounts.

In Yokohama, the average wait for an
oven is more than four days, driving up demand for half-way morgues like Lastel.
“Otherwise, people have to keep the bodies at home where there isn’t much
space,” Mr Teramura said.

It also provides a captive audience to which he can
market his be worth ¥1.96-trillion by 2015.

As for Mr Teramura, he’s pushing
ahead with expansion plans. He pulled out his cellphone and shows a picture of
an office building he just bought in another Yokohama neighbourhood. When he has
finished renovating, it will be his second Lastel, with room for 40 bodies, more
than double the first.

PICTURE Of The Night…