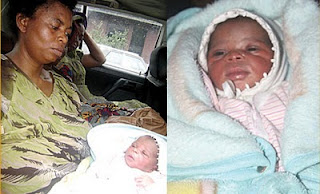 The life-affirming tale of Precious
Donatus Ogbonna and her controversial babies is yet to be over as she has
delivered another baby, the same way she delivered seven others bringing the
number to eight in a space of 16 months, and about two months after she was
released on bail from the prison custody

It was one of the places Saturday Vanguard had reported of
carrying out mysterious deliveries. Precious is yet standing trial in court over
child trafficking.

Her lawyer, Barrister B. E Nwigwe had written Vanguard
informing it of the planned delivery and requested everybody to witness the
process. He said he had also written the Police, the Court and NAPTIP to be part
of the process. Among all these, only Vanguard was present at the place during
the birth.
The reporter had arrived Owerri, Imo state on Tuesday,
ahead of the planned delivery scheduled for Wednesday September 21,
2011.

She didn’t appear as an expectant woman, moving about
with so much agility that no one could believe she was pregnant let alone about
to deliver a baby. But she told Saturday Vanguard that the last time she went
for antenatal at the same clinic, she was given September 21 as her delivery
date.

She added: “the thing has been disturbing me since the
last few months.” She said she chose the clinic against the conventional
hospital because the hospitals did not see anything in her stomach other than
fibroid, but Rose Natural Clinic, detected it was a baby and gave her an
Expected Date of Delivery, EDD.
On Wednesday, the reporter travelled from Lagos to Owerri
to join Precious and four other women who are members of her church in a
commercial ITC bus to Port-Harcourt at about 1:15pm. We did not reach Port
Harcout until about 4:10pm.

The stress of driving on the Aba-Port Harcourt road was
phenomenal, exacerbated by the bad road along Oyigbo, Aba road. It was the most
deplorable road in the country. That also was enough to induce labour on a
heavily pregnant woman passing through the road in a popular ‘Keke NAPEP’. We
arrived the clinic at about 5:05pm and was joined by another Vanguard reporter
based in Port-Harcourt.

There was no indication denoting an activity of such
going in the environment. The only sign post in that area was erected at the
Heritage Junction, about a kilometre from the house and it read Ogechi Natural
Clinic. No other natural clinic was known in the neighbourhood.

It was a two- apartment bungalow. The first where the
delivery took place was occupied by Nurse Rose for her activities. The large
sitting room is used as the waiting room where guests and patients are received.
There is a lobby by the right hand side of the waiting room which has a toilet
and a room used as labour room.

There were three other middle aged women billed for
delivery that evening. They all had a similar appearance which did not portray
heavy pregnancy. After several hours of waiting, four tea-cups were passed
around to the four ‘expectant women’. All the four women drank the substance in
it which the nurse said would aid ‘labour.Few minutes later, she began walking
around, exercising her body apparently to aid the ‘labour’. They were called in
according to their turns.

Precious was the second in the list. She told Saturday
Vanguard that she had been tested and that the nurse confirmed that she could
feel the head of the baby and that she would be the second person on the
list.

The first person had a baby girl about ten minutes after
she was called in. Precious who went inside the ‘labour room’ about 11 25pm did
not come out until 12: 15am. No one was allowed inside the labour room to
witness the process, not even any of the female members of her church was
allowed into the labour room. Precious had assured Saturday Vanguard that a
third party would be allowed to witness the process in order to vindicate her,
but the fair-skinned Nurse Rose objected, arguing that such a demand would not
be made in a conventional clinic . She threatened that she would walk-out if
Precious should insist. She entered the labour room all alone with Nurse
Rose.

Right from the moment she entered, it was shouts of
‘Jesus’ and cries of pain. The cry rent the air so much that all the women in
the waiting room began to pray. Ada Ngozi, her personal assistant who was
arrested with her in June and recently got released on bail did not fail to show
her dexterity as a prayer warrior. Eventually, when Nurse Rose finished with
Precious, she asked whoever cared to come and see the baby. The baby was dressed
up while other women took their turns in the delivery room. They all had baby
girls and none of them breastfed their babies. From about 12:15 am till about
8:30am when we were with her, we observed that Precious’ baby was not breastfed
nor fed in whatever way throughout our stay. The baby did not cry either. With
this development, the issue of Precious controversial birth is yet
unresolved.

Responding to questions after the delivery, Precious said
she is satisfied and believes that she would be vindicated. On when she got the
EDD, she said she was given the date recently when she went for check up at the
same clinic. We gathered that Nurse Blessing in whose clinic she delivered five
of her babies refused to handle her latest delivery with an alibi that she was
on vacation and would only resume after the dedication of her baby in
October.