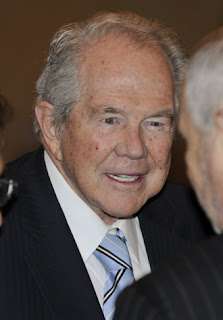 Religious broadcaster Pat Robertson told his “700 Club” viewers that divorcing a spouse with Alzheimer’s is justifiable because the disease is “a kind of death.”
During the portion of the show where the one-time Republican presidential candidate takes questions from viewers, Robertson was asked what advice a man should give to a friend who began seeing another woman after his wife started suffering from the incurable neurological disorder.

“I know it sounds cruel, but if he’s going to do something, he should divorce her and start all over again, but make sure she has custodial care and somebody looking after her,” Robertson said.
The chairman of the Christian Broadcasting Network, which airs the “700 Club,” said he wouldn’t “put a guilt trip” on anyone who divorces a spouse who suffers from the illness, but added, “Get some ethicist besides me to give you the answer.”

Most Christian denominations at least discourage divorce, citing Jesus’ words in the Gospel of Mark that equate divorce and remarriage with adultery.
Terry Meeuwsen, Robertson’s co-host, asked him about couples’ marriage vows to take care of each other “for better or for worse” and “in sickness and in health.”
“If you respect that vow, you say ’til death do us part,'” Robertson said during the Tuesday broadcast. “This is a kind of death.”

In my own opinion, i thought marriage was for better for worse……what do you think?