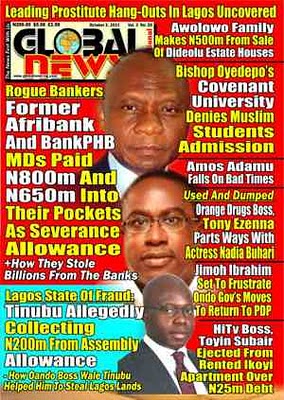 I guess the fear of Boko Haram is the begining of wisdom…I bet  Bishop Oyedepo  must have  good reasons for denying muslim students admission is his university, taking  such moves considering
the height of religious violence and tension in the country at this time. On the other hand,
some others feel it’s the height of religious discrimination, an issue which in
most foreign countries is taken seriously. What do you think?

Continue to read the full story.

Against their teachings and their doctrine that we should not
discriminate against one another as it is against the bible which wants us to
love our neighbors as ourselves, it can be surprising sometimes when those we
expect to lead when it comes to issues relating to love and tolerance are found
wanting on the same issue.
Bishop David Eniola Oyedepo is a man who many see
as an embodiment of tolerance as his teachings prove so. Apart from his normal
teaching which is based on Faith, he had at different occasions talked
extensively on tolerance. It is therefore appalling that a gross act of
intolerance will happen in a place where he’s the head.
It happened at his
church-owned university,CovenantUniversity, during the current admission
process. One Abdul-Gafar Ayomide Salami is doing all his best to secure
admission into the institution for the next academic session. During the last
JAMB examination where he scored 295, based on his performance he was invited
for the post- JAMB exam which was conducted by the university authority. He
again performed excellently, with average score of 65/80. His West African
Senior School Certificate Examination stated that he passed with good grades in
the following subjects as listed; Economics – B3, Geography – A1, English
Language – B3, Further Math – A1, Mathematics – A1, Agric Science – B3, Biology
– B3, Chemistry – B2, Physics – B2,
While they were waiting for the school
authority, the family of Gafar was so sure that with his results, no matter what
he was going to secure admission.
But the family got a rude shock when they
were told that the school management had decided not to admit Muslim students
for the coming academic session. According to the father of the young boy, who
spoke to us: “Initially I thought it was kind of April Fool joke and I decided
to send my wife to go and find out what exactly was going. But to to our
consternation the admissions officer simply confirmed that they were not
admitting any Muslim student this year.”
He said further that he couldn’t
believe what he was hearing and he felt that he was in some kind of trance or
that he was in another country because he had never in his entire life heard
something like that, which is against the Constitution of the Federal Republic
of Nigeria. He has vowed to follow the case to a logical conclusion even if it
means going to the court. “It is not about my child alone, but so that the
discrimination and bigotry will not continue in future,” he affirmed.
The
issue is casting a shadow on the many awards the university may have won in the
past as many are condemning the management of the school for getting themselves
involved in such condemnable act. There was a time in the past that a member of
the church who lost a child in one of the schools owned by church was furious
over the nonchalant attitude of the school management which led to the death of
the child.
It is expected that the Chancellor and the Vice-Chancellor will
act fast on this current issue as it is not only a dent on the image of the
school but also a question of truthfulness on the school to Christianity, which
the school professes based on its affiliation with the Living Faith Tabernacle,
or Winners’ Chapel, as the Oyedepo-led church is also known.
Meanwhile, all
efforts to speak with the school authority to hear their own version of the
incident story didn’t succeed because the person who picked the phone claimed
that he was not in the best position to talk on the issue but promised to relay
our question to the appropriate quarters. He promised they would call us back
but we had not heard anything from them as at the time of going to
press.