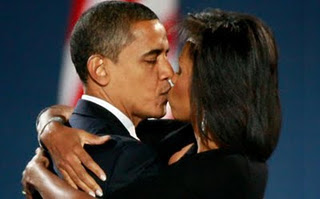 Word on the streets is buzzing that the President and his First Lady are
expecting their third child! and today i stumbled upon an article supposedly written from the white house…Well if it eventually turns out to be true, i and  K readers wish them they very best…continue reading to see the article.
WASHINGTON
– The White House announced that Michelle Obama is pregnant with the couple’s
third child.
“Michelle
Obama is pregnant,” White House sources said. White House Press Secretary, Jay
Carney, told WWN he would not confirm or deny the rumor. But WWN has confirmed
that Michelle Obama is about two months into her pregnancy and the President
and First Lady expect to have the baby sometime in late May, 2012.
There
was a great deal of mystery about the whereabouts of the President and First
Lady this summer. There were many rumors about where they might be (Martha’s
Vineyard, Chicago, Kenya)- but now we know. The happy couple was spending
quality time together in the White House, making a new baby.
The
last time a baby was born in the White House was Patrick Bouvier Kennedy. He
was born on August 7, 1963 and only lived two days. Patrick was the youngest
child of President John F. Kennedy and First Lady Jacqueline Bouvier Kennedy
and brother to Caroline Kennedy and John F. Kennedy Jr.
The
President and First Lady are “ecstatic” about the news of a new baby. Michelle
Obama, 48, and Barack Obama, 50, waited almost seven years before having
children. Their first daughter, Malia Ann Obama was born on July 4, 1999 and
Natasha (often called “Sasha”)was born two years later on June 10, 2001.
It
is too early to determine if the baby is a boy or a girl, but William Daley,
the President’s Chief of Staff, reportedly said that the President is hoping
they have a boy. “I’d love to see Barack
Jr. in the White House some day,” he reportedly said.
President
Obama is hoping the baby will spend it’s first four years of life in the White
House. He has also created a Baby Czar to handle the preparations for the Baby
Shower and Baby Party.