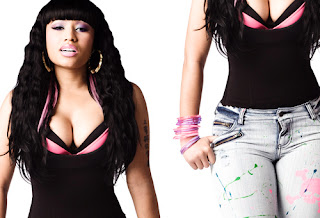 Nicki Minaj has
been named Billboard’s “Rising Star” for 2011, capping off a year that
has seen the hip-hop star top the charts with her massive-selling “Pink
Friday” album and, most recently, earn a pair of trophies at the
American Music Awards.

The Rising Star Award acknowledges Minaj’s phenomenal year and will
be presented at the Billboard Women in Music Event on Dec. 2 in New York
City.

Minaj
will be joined at the sixth annual event by Billboard Woman of the
Year Taylor Swift, her friend and an early booster through radio
interviews and a widely seen concert cameo.
“I
am deeply honored to be recognized by Billboard,” says Minaj. “My
nation of barbz and I have come a mighty long way; yet we are nowhere
close to where God will take us. Sit back and enjoy the ride.”

The rapper and singer has emerged as one of music’s most popular
entertainers since releasing her debut album “Pink Friday” late last
year.

A BIG Shout Out To Every Reader Of This Blog

Did This Guy Go Too Far?