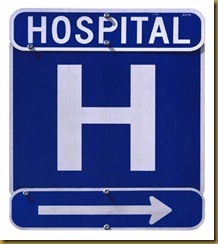 IT was a harrowing experience for newly delivered and would be mothers at the labour and maternity Ward of the Edo State owned Central Hospital Benin when suspected robbers were allegedly said to have invaded the hospital at the early hours of today…It was gathered that the maternity ward had been previously attacked by suspected ritualists….Hmmmm this case get K-leg o, na only this hospital dey for Benin??? Continue reading.
It was gathered that the hoodlums were said to have found their way into the Maternity Ward through the window and forced the women in the room to scamper for safety with their new born babies.
One of the nurses at the maternity ward who spoke on condition of anonymity to newsmen said the attack took place at about 1am.

She however added that the attackers did not succeed in taking away any new babies as the babies were taken to safety before the attackers finally came into the ward.

A husband to one of the victims who identified himself as Bernard Isokponpa said his wife lost two GSM handsets and some money to the attackers, even as he said that he could not confirm whether they were ritualists or robbers as his wife ran out with their new baby boy.

“Why would there be no security at the hospital. What if they had taken my baby? My wife called me at about 1:30am that armed robbers broke into the labour room. She said she ran upstairs with the baby,” he said.

Secretary of the hospital, Mr. Isaac Asien confirmed the attack but said they were pick-pockets and not ritualists or armed robbers.

Driver's Account Of How A Delta State Gubernatorial Aspirant, Ogbe Onokpite, Was Allegedly Murdered By The Nigerian Police