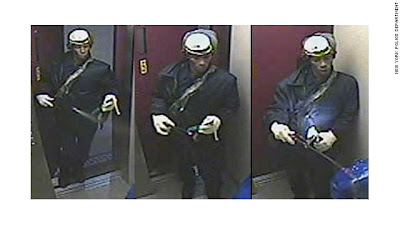 Police in New York are looking for a man who doused a woman with a flammable liquid and lit her on fire, killing her, in the elevator of a Brooklyn apartment building Saturday.

Neighbors said the woman was returning home to her fifth floor apartment in Prospect Heights after a grocery store trip.

When the elevator arrived, the man — dressed as an exterminator — sprayed her with an unidentified liquid, set her alight and then fled, police said.

Residents told CNN affiliate WCBS they heard screams and saw smoke — and realized a woman was on fire inside the elevator.

“Myself and someone from the sixth floor went down knocking to get people out. Knocking on doors telling people ‘There’s a fire, get out, get out,” a resident named John told the station. He did not want to give his last name.

Neighbor Carmen Martinez told the station that the victim was a woman in her 60s who had lived in the building since the 1980s.

“She used to give toys and gifts to kids all the time,” Martinez told the station.

The attack was caught on two surveillance cameras. Photos that police released of the attacker shows a man dressed in dark blue clothes, white gloves, with a dust mask on his head and carrying a container on his back.