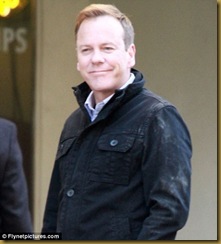 Jack Bauer fans worldwide were left devastated earlier this year when hit US TV series 24 came to an end.
But now they can breathe a sigh of relief as it has been revealed that a movie version of the show has been given the go ahead, seeing Kiefer Sutherland reprise his role as Counter Terrorism Unit (CTU) agent Bauer.
As it was confirmed Fox will begin shooting the big-screen adventure next Spring, Sutherland was spotted looking more than a little happy in Los Angeles

A film of the much-loved show has been in the pipeline for the past few years, with Sutherland giving some hints about the plot of the movie in a previous interview.
He said: ‘It’s going to be a two-hour representation of a 24 hour day, so we were not going to be restrained by the real time aspect of the TV show. With the TV show we always had to have the crisis come to us because we couldn’t move. Twice we put Jack on a plane and it was a disaster.
‘This will be different – it will be very feasible to get from Eastern Europe to England in the course of 24 hours! And the crisis can be more personal – it doesn’t have to be a huge bomb, it doesn’t have to take out the rest of the world. It’s very exciting.’

And, in an interview in October, Sutherland said he was more than a little excited about returning to the role of tough guy Bauer.

He said: ‘We’re going to hopefully start production in April on the film, and that’ll be out later on in the year.
‘We’re still a few months away, but we’ve got a script that we’re very excited about and we’re moving forward.’

FINALLY…HURRAH ! “24” was the only show on television EVER to actually have you on the edge of your seat….compared to all of the sitcom schlock and reality TV that is out there now…I just wish it was coming back on TV each week…a movie justi sn’t enough…and Chloe O’Brien better be in it ! She is the best suppporting actress ever and I heard the city of Los Angeles once named a street after Jack Bauer in gratitude for his saving the city several times. They had to rename it after people kept dying when they tried to cross the street. No one crosses Jack Bauer and lives.