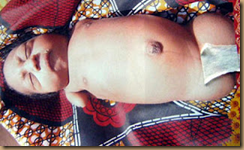 A baby, girl, without hands and legs, has been born in Sandigalua village in Zaki Government Area of Bauchi State. The baby, named Fatima, was born to the family of Ahmadu Didda, a peasant farmer and wife, Rukaiyya, on January 13.

Fatima’s father, Didda, however, expressed gratitude to God for giving them the child, describing her as a beautiful baby. Didda said Fatima was delivered at home and that both the mother and the baby are healthy.

Father’s plea
He said: “This is a gift from God. But it won’t be easy for us to raise Fatima because without legs and hands, she needs special care and attention. We feel sorry for her but with assistance from government and individuals I know that she will live a good life.”
The couple, however, appealed to both government and well-meaning individuals to come to their aid in order to care for the child.

Fatima Didda
Also, in a special appeal, a blind man who is the Chairman of Physically-Challenged People in Sakwa, Mr. Abdullahi Gindi, said: ”It is the duty of society to ensure that Fatima is not discriminated against as a result of her condition.
“She (Fatima) needs to be assisted. We are grateful that she was born a healthy child. She sulks normally and so we need to protect her.
”But her parents are poor and that is why we are calling for assistance so that Fatima would live.”
Doctor’s opinion

A medical practitioner, Dr. Cletus Eze, has said that a woman can have a deformed baby if she takes certain drugs at the early stages of her pregnancy.
Dr. Eze, who spoke in a telephone interview with Vanguard, lamented that Nigeria was one of the few countries in the world where even a university graduate would buy drugs from the shelf and swallow them without even reading the leaflets accompanying such drugs.

According to him, a woman can give birth to a deformed child like Fatima if she takes drugs like flagyl within the first three months of her pregnancy.
Self-medication
He said: ”Nigeria is the only country where people buy drugs from non-professionals and administer same on themselves. There must be laws to regulate some of these bad practices because of the harmful effects of certain drugs.

“The mother of Fatima must have taken certain drugs, which she would not even remember having taken at the early stages or within the first three months of her pregnancy.
”The worst thing is that she might not even be able to sue anybody, because such drugs were not prescribed by qualified people and she must have forgotten the particular drugs she took or where she bought them.
“The authorities must continue to educate the citizens on the bad effects of self medication,” he added…Incase if you missed the story of the woman who delivered a frog like baby click here