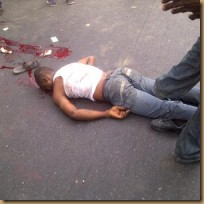 Traffic on the Lagos/ Ibadan Expressway was halted for more than one hour yesterday when a conductor (commercial bus attendant) was killed at Motorways, near the old Toll Gate, following monetary tussle between him and two unidentified officials of the Lagos State Traffic Management Authority (LASTMA).

The conductor, identified as Mr. Rashidi Alabi (30) and an indigene of Kwara State, was alleged by eyewitnesses to have been forcefully pulled down from his moving Volkswagen 14-seater commercial bus with registration number XZ 78 AGL by two unidentified LASTMA officials for failing to part with N50.
It was gathered that Alabi was knocked down by an Ibadan-bound trailer just by the bus stop between the Motorways pedestrian bridge and Bi-Courtney.

As at 12:30p.m.As of getting this report, Alabi was still lying face-down, lifeless in a pool of his own blood, with cash of various sums – N50, N200, N100, N20 – on the road. He was in that position until about 1:30p.m. when his lifeless body was lowered into RRS Hilux van with registration number DL 171 LSD and driven to the morgue at the Lagos State University Teaching Hospital (LASUTH) in the company of his brother, Fatai.

The sad incident resulted in a mob action against LASTMA officials as aggrieved members of various transport unions mobilised to the scene, attacked and chased out anybody wearing LASTMA uniform,
forcing policemen from the Isheri Division drafted to the scene to divert all vehicles temporarily into the nearby Ikosi Road, to connect the expressway again by Bi-Courtney end or the Sir Michael Otedola
Estate.

The traffic build-up also spilled into the nearby Ikorodu Road, engendering heavy traffic jam. Eye witnesses said the deceased wanted to outsmart the LASTMA officials who are usually settled financially by commercial buses after loading at the bus stop.

“His bus had moved out of the bus stop without the usual settlement when the aggrieved traffic officials pounced on him,” one of the sources said.
Fatai, who could not be consoled as tears welled-up his face, said the deceased has left him and his poor widow to cater for his four kids.
“How do we cater for these children? He has four children. His wife recently gave birth and he is yet to even do the naming ceremony and now he is dead,” he said.