The Police in Abuja have waded into the mysterious disappearance of N380 million paid into an account in a commercial bank vanished within 12 hours after lodgement.  The account had remained dormant for years before the money was allegedly paid into it. Detectives from the Force Headquarters, Abuja, who are trying to unravel the mysterious withdrawal, have arrested the bank manager, with a view to getting to the root of the matter.

A source alleged that staff of the bank had always connived with others to perpetrate such fraudulent acts. Also arrested are five other suspects from the bank, while two company chief executives fingered in the fraudulent transactions are helping the police in their investigations.

Vanguard investigations showed that early this month, at a Garki branch of the bank, the suspects conspired to commit felony, criminal misappropriation, criminal breach of trust and cheating.
The suspects were alleged to have fraudulently and dishonestly induced one MustaphaIbrahim to deliver N381 million for the supply of export proceeds valued at $2.5 million, which they claimed they had in their foreign bank account.

During investigation, the police discovered that the victim, Ibrahim, was tricked into paying the said money into the bank account, which was an equivalent of $2.5 million to be paid to him.
As soon as the victim paid the money into the bank account which had been dormant for years, the bank manager, allegedly connived with the suspects and immediately cleared the money without paying the said $2.5 million.

In a charge filed against the suspects and the bank, at a Federal High Court, Abuja, by the Inspector-General of Police, who is the complainant, it was alleged that the suspects defrauded Ibrahim of $2.5 million which they knew was nowhere. 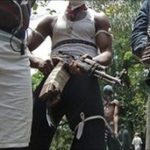