Jumping from one set to another among movie stars has become a recurring decimal
in Nollywood and often results in war between the parties involved. This time
around the war is between controversial Nollywood actress, Tonto Dikeh and a
notable producer based in Asaba.

It was gathered that the controversial
actress disappeared from the set since Monday, and has never bothered to show
up till this moment. Our source said, Tonto left the set, on the
pretext that she was travelling to Lagos, only for her to resume work in
another production.

As it stands now, the producer is said to have
alerted the leadership of the Actors Guild of Nigeria(AGN), and he is
threatening to get the actress arrested should she fails to return to his set
latest this weekend.

“This is the height of indiscipline in Nollywood.
Tonto claimed that she was travelling to Lagos and would be back on Tuesday.
Only for her to join another production. We have reported the matter to the
Secretary-General of AGN.

“Her absence has delayed the completion of our
production which we started nine days ago. We are supposed to be rounding off
this weekend but we can’t. Tonto cannot disappear with all the money we have
paid her.” an angry source fumed.

Directed by Nonso Ekene Okonkwo, Tonto
is starring in the movie alongside Frank Atus, Queen Nwokoye, Oluchi Ukaku among
other stars. The movie is titled ” Blood Rage.” 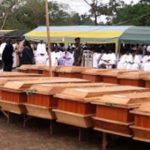