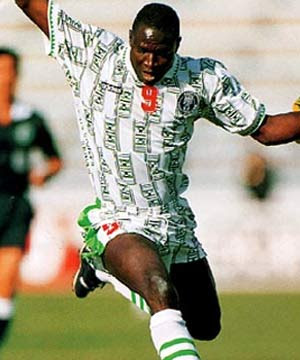 Aggrieved youths at Busayo Taiwo Street, Oni and Sons area residence of the former Super Eagles striker, Rashidi Yekini, in Ibadan have warned the family members of the late footballer to stay away from his property on the street or risk being attacked.

The angry youths on Monday protested what they described as inhuman treatment purportedly meted to the former international footballer.
Yekini died on Friday after being forcefully whisked away by family members with some Islamic clerics on April 8 (Easter Monday).

However, one of the aggrieved youths, Yomi Ojo, who claimed to be a friend to the deceased, said that there was no indication that Yekini was mentally imbalance at the time in question. He said that the family was not happy with him that he sent all his tenants and lived alone in his expansive home without entertaining any of the family members and friends.

Ojo, who is a polythene fabricator, said, “I have known him for about seven years. Yekini would not interact with people. He was a quiet and disciplined man. He loved keeping to himself. But at times he confided in me.”

“He used to drive in and out by himself and never assaulted anybody. He had gun but never killed nor armed a fly.”

He said that when his captors came for him and chained his arms and legs he struggled but was overpowered. In the process, Ojo said that he sustained bruises all over his body and was blood soaked.

He explained that “All pleas to be set free fell on deaf ears. His mother, sister, Sekinat; and brother, Wasiu; with two Islamic clerics bundled him into a bus and drove off. He called for help while he was being driven away but those in the neighbourhood were helpless because it was a family issue. We never knew it could lead to his death. He was not sick.”

Another youth, Lasun Olonande, said, “Sometimes ago the family members came with a team of policemen to force him to go with them but he explained to the police that he was not mentally sick as alleged by the family. As a result of this he was left to go.

“He was an easy-going person and did not like flamboyant life. He was always giving to those in need. The beggars usually lined up in his house to take food.”

One of the aides of Senator Rashidi Ladoja, Nofiu Isiaka, popularly called ‘Aluta,’ who lives in the area, said, “He had girlfriends which he brought home once a while.

If he was mad would the girls have agreed to go out with him? We are angry. We know that his house is not our property but we want our temper to die down before the family come around to fight over his inheritance.