Facts emerged on Monday that the mental illness that deceased football star, Rashidi Yekini, suffered, consumed all his savings, dresses and certificates before he died.

While there had been speculations that he became mentally deranged for some years, post-death revelations from members of his family indicate that he, at a point, set his certificates, awards and dresses ablaze. Besides, the abnormal generosity that marked his last years consumed all the money he had in the banks.

These revelations came from one of Yekini’s sisters, Mrs. Rafiat Adetunji, giving a vivid picture of the health challenge the goal merchant had, Adetunji said, “At a point he gathered all his awards, certificates, and clothes and burnt everything. Even the time we went to pick him to go to hospital, there was only one cloth in his house. He had burnt everything. When we took him to the hospital, about four weeks ago, not only was he mentally unstable, he was also sick. We did not have money to treat him so we went to the banks where he had an account but unfortunately, the bank said he had no more money in his account.

“So we took him to the hospital and we were treating him until he died in the hospital in Ibadan – somewhere in Akobo.”

She noted that Yekini was very caring and compassionate to not only his family, but also to outsiders.

“Yekini took good care of our mother when he was well. He was a good son to our mother and a good brother to us, his siblings,” Adetunji said.
She, however, added that trouble began when such generosity took a strange dimension.

She stated that she went in company of her husband and some of the family members to verify the information and find a way to assist the football star.
According to her, when they got there, they realised that it was like a ‘mental derailment.’

Adetunji said when their efforts to take Yekini to a hospital in Oyo State failed, as he resisted their entreaties and even overpowered them, they sought the assistance of the then, Oyo State Police Commissioner, Adisa Bolanta in 2010.

According to her, Bolanta ordered that Yekini should be brought to him. When Yekini was brought before the CP, the football star said he was alright and was said to have even given some money to some of the police officers present. The CP was said to have been surprised and did not know what next to do or how to assist them since Yekini appeared to be alright.

Adetunji said, “After that, we got information that Yekini went to the bank and withdrew some large sums of money, gave out some to people and spread the rest into the air. We also heard that sometimes he would go to the Liberty Stadium and be clearing grasses.

“In an attempt to get legal backing so that we could treat him, we also went to court. It was in 2010 that we went to the police and the court. But Yekini said he was alright and so the court could not help either.

“Even when former governor of Kwara State, Bukola Saraki wanted to give him an award, he said he was not interested. My younger brother later went on Yekini’s behalf to collect the award. His health deteriorated about five years ago.

Yekini’s mother, Sikirat, said she noticed the strange behaviour of the late football star about five years ago, adding that she and the family members tried to salvage the situation by treating him but all to no avail.

“He was sick for about five years. It is mental sickness. His behaviour had been irregular. Because of that, we tried to help him by finding a solution. But unfortunately he is no more. It is very sad.

“My son was a very compassionate person who tried his best to keep me comfortable. He also was of great assistance to his siblings before the surprising ill health,” Sikirat said.

He was said to have later got married to Kemi in Ibadan in 1994. Kemi is said to be a graduate from University of Ibadan but the wedding lasted for only one month.

Yekini, our correspondent learnt, later had a daughter from another woman, Deola, who gave birth to another daughter, Opeyemi for Yekini.

He was said to have lived together with Deola in Zurich, Switzerland for some time. Deola and Opeyemi were said to be the only people who had easy access to Yekini while he was alive.

The football star lived a solitary life before his death, having allegedly driven away his tenants and prevented people, including many family members, from having access to him.

Former governor of Osun State, Olagunsoye Oyinlola, who was present at the burial on Saturday, said he was not aware of Yekini’s strange behaviour, adding that the goal merchant could have been better taken care of. He urged federal and state governments and sports adminstrators to ensure that sportsmen were well taken care of so that others would want to serve Nigeria.

“I was not aware that he was sick. I did not even know he was from Ira. Yekini could have been treated better. If he had been taken better care of, maybe he would not have died at that point,” Oyinlola said.
But Super Eagles goalkeeper trainer, Ike Shorounmu, said Yekini was never abandoned, adding that on several occasions, the Nigerian Football Federation called the deceased for awards through him. But Shorounmu, said Yekini declined the awards.

Former NFF executive committee member, Taiwo Ogunjobi, said he used to speak with Yekini until his death. According to him, Yekini never showed any sign that he was mentally unstable during their discussions. He, however, said the former goal merchant was not physically accessible.

Ogunjobi said, “When I was NFF Secretary General, under Sanni Lulu, I personally tried several times to contact him and tried to know his state of health. Yekini would always say he was alright. NFF even said since Yekini was the first goal scorer for Nigeria at the World Cup, it wanted to make him an ambassador. I called him and we met at the Liberty Stadium and we also wanted to take him to South Africa but he said he did not want to be an ambassador.

“Two months ago, I was driving along Ring Road, Ibadan with one of my friends and he (Yekini) saw us and stopped and we exchanged pleasantries and later we called each other after that day. That is why I was so shocked when I heard about his death on Friday.

“Yekini was discovered by Segun Odegbami and me while on playing tours of Kaduna. He grew to be the biggest star when it comes to goal scoring in Nigeria and Africa and he never looked back. He should be immortalised. They should not name any mushroom stadium after him. They should put in place a structure or programmes that would be of great remembrance of Yekini.” 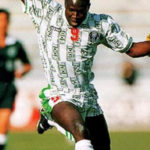