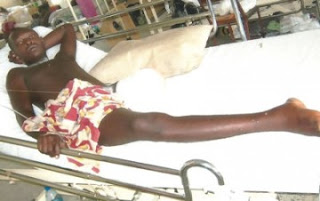 The family of teenager shot and wounded by a
policeman seek justice, narrating the incident, victim’s father, Chief Nta
Asuquo, said his son, an SS II pupil of Government Science School, Henshaw Town, Calabar South, was shot by one
of the members of a team of anti-robbery policemen from Efut Division, who
stormed his compound to arrest his daughter.
He said, “My son’s ordeal started at about 2 pm
on that fateful day when a team of anti-robbery policemen from Efut Division
stormed my residence at 90, Edibe-Edibe Road, Calabar South, in a commando style
to arrest one of my daughters, Miss Martha Asuquo, on a trumped up allegation of
threatening the live of one of
the neighbours.
“On arriving at the compound with a police
pick-up van, the fierce-looking officers requested to arrest my daughter for
allegedly assaulting one of the neighbours, a lady. I obliged.

“I was made to understand that my daughter had
a misunderstanding with the lady, who decided to use her contacts with the
police to arrest my daughter.

“When they came my daughter, Martha, was just
coming out from the bathroom and the policemen insisted that she should follow
them to the station. She pleaded with them to let her dress properly since she
had just emerged from the bathroom.”
“In spite of the my pleading, the policemen
refused and it was at that point that my son, Asuquo, now intervened and pleaded
further with them to allow her sister wear her clothes so that she can follow
them for interrogation. One of them quickly told my son to keep clear or he
would shot him.
“But my son kept pleading with the policemen to
allow his sister to dress up properly since she was just coming out from the
bathroom. He (my son) told the policemen that it was not wise to drag her into
the van with only wrapper around her waist and perhaps they felt provoked by my
son’s insistence and opened fire on his leg.”
In an emotion-laden tone, Asuquo, said the
leader of the team on seeing that his son was bleeding profusely ordered his men out of the compound and they jumped into their van and ran
away.
However, he said with the help of the people
around he was able to identify the officer that shot his son as Asuquo Ekpo with
Force No 169385.
Looking as if the world had crumbled on him,
Asuquo said, “I don’t know what next to do; my whole life is finished. Look at
me and look at my son again. What have we done to deserve this kind of treatment
from Nigerian Police? Now, my 16-year-old son has been amputated; how do we
survive such ordeals and
wickedness of the police?”
Weeping profusely, the father of the victim
said, “I can’t imagine my son lying critically down at the University of Calabar
Teaching Hospital; I can’t believe that at this tender age my son’s leg will be
cut off as a result of bullets
fire by police.

“Life to me now is meaningless unless that
police officer who shot my son is brought to book. Please, I want justice to be
done because my son’s life can’t just be wasted for nothing. Already, I have
contacted a lawyer to follow up
the case before government will sweep it under the carpet.”

In a petition written on behalf of Asuquo and
addressed to the state Commissioner for Police, Mr. Osita Ezechukwu, the
Managing Partner of Uke-Eteh Chambers, Mr. Eriba Eriba, sought justice for the
victim and his family.
Eriba described the action of the policeman as
unwarranted. In the petition, dated April 30, 2012 and
titled, A case of Malicious Shooting of Master Asuquo Nta Asuquo,” he
said it was unfortunate that the Nigeria Police had not learnt any lesson, not
even with the rebranding campaign of the acting Inspector-General of Police, Mr.
Mohammed Abubakar.
The counsel said, “It is disheartening and unfortunate to observe
that in this present era where every sector in the country is being sanitised, a sergeant in the Nigeria Police
can use a rifle recklessly on an unarmed civilian. It is against this background
that we urge you to step into the matter and cause a discreet investigation to
be carried out so that justice can be done.”
Meanwhile, SATURDAY PUNCH learnt that
the police authorities had set up a panel to investigate the circumstances
surrounding the alleged shooting of the teenager, who is currently at the
University of Calabar Teaching Hospital.
In his reaction to the matter, the state Police
Public Relations Officer, Mr. Hogan Bassey, said, “We are aware of the incident.
The victim was said to have resisted arrest. For now, the police are looking
into the matter and very soon will make its findings public.”
PUNCH 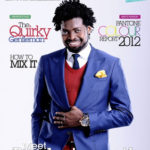