Reality TV star Kim Kardashian reportedly told friends she’s more famous than Academy Award winning actress Angelina Jolie. Watch out Kim Kardashian, Angelina Jolie isn’t too happy with you!
The 31-year-old reality star was reportedly overheard boasting to friends that she’s more famous than the Oscar-winning actress.
One of Angie’s team members pointed the story out to her, thinking she’d get a good laugh out of it, but she actually got annoyed,” an insider tells Star. “Angie works super hard to make an impact on the world with her charity work and everything else she does.
The last thing she wants is to be compared to someone as shallow as Kim, who just shops and makes public appearances. She thinks Kim saying these things actually drags down her reputation.” Though Angelina tries her best to stay out of the Hollywood spotlight, she is furious that Kim would use her name simply to get media attention. “It’s ridiculous that Kim would think she’s more famous than Angie,” adds the insider. “Angie says they’re not even in the same league.” Who do you think is more famous, Kim or Angie?
[Culled from Star Magazine] 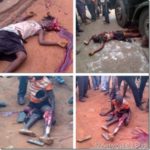