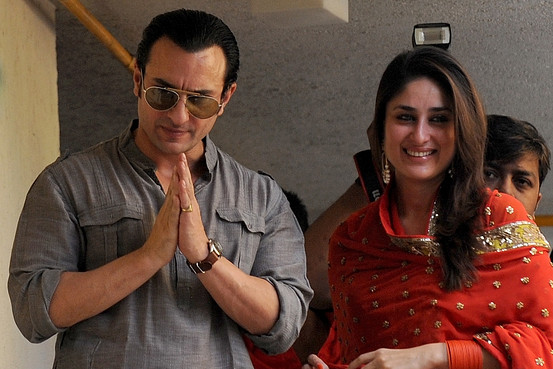 In what is expected to be the wedding and social event of the year in India, Bollywood actors Saif Ali Khan, 42, and Kareena Kapoor, 32, are finally tying the knot in elaborate ceremonies spanning several days.
“Saifeena,” as they’re popularly known, come from two of India’s most illustrious families – combining old fashioned princely aristocracy and cinematic Bollywood royalty with a literary lineage thrown into the mix.
Mr. Khan is the son of the late Mansoor Ali Khan, Nawab of Pataudi (one of the princely states in British India) and Bollywood actress Sharmila Tagore (great grand niece of Nobel prize winning Indian writer Rabindranath Tagore.) Ms. Kapoor is granddaughter of the legendary actor Raj Kapoor, making her a member of one of the most established families in Bollywood history.
The gossip pages of Indian newspapers and magazines are predictably focusing on the glitz and glamour of the event, but it is noteworthy that there’s a 10-year age gap between the new bride and groom.
Ironically enough, Mr. Khan has also been on the other side of the aisle, as it were, in his previous marriage. His partner then was Amrita Singh, a former Bollywood actor, who was 12 years his senior (he was only 21 at that time.) In popular parlance, Mr. Khan has gone from being “cradle robbed” to becoming the proverbial “sugar daddy.” A less kind interpretation would deem Ms. Singh to have been a “cougar,” along the lines of Hollywood actor Demi Moore who popularized in the Western imagination the trend of older women marrying younger men, when she got together with actor Ashton Kutcher.
Seriously though, the nuptials of Mr. Khan and Ms. Kapoor represent a well established and accepted cultural fact in India and indeed in most other societies: men tend to marry women younger than themselves. According to data collected by the United Nations the largest gap for first marriages in the Middle East and Asia is Bangladesh at 7.2 years, with Pakistan at 5.1 and India at 4.7

13 Year Old Girl Narrates How She miraculously escaped from ritualists, 10 others used for rituals

PHOTOS OF THE DAY