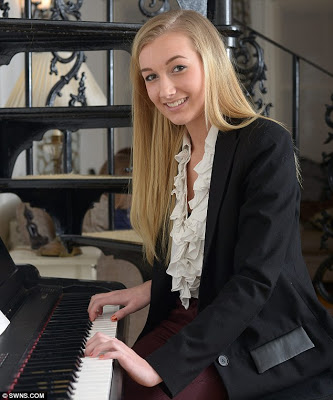 Lauren Marbe, A 16-Year Old, shocked her  teachers by scoring 161 on the Mensa brain test after she was entered with other pupils from her school for fun, the Telegraph has reported.
But her remarkable brain test score means she is now officially smarter than Professor Stephen Hawking, Bill Gates and Einstein – who all have an IQ of 160.
Marbe has now been enrolled in prestigious society Mensa, which means she is officially in the top one percent of cleverest people in the world.
The teenager loves fake tanning, blonde highlights, manicures and getting dressed up for parties themed around her favourite reality TV show.
She is the daughter of a black cab driver and dreams of one day being a performer in the West End – like Essex celebrity Denise Van Outen.
The dedicated pupil – head girl of her primary school and currently a prefect – was already considered bright after scoring a double A* in her science GCSE, which she took a year early.
She is now aiming to take A-Levels in art, physics and maths after her GCSEs, this summer, and would love to study architecture degree at the University of Cambridge. (ANI)