Lolzzz only in America!
A Florida woman explained to cops that she stabbed her boyfriend after he purposefully passed gas in her general direction.
Deborah Ann Burns, 37, told police that she was watching TV Tuesday night in the Immokalee home she shares with Willie Butler, her boyfriend of six years. Burns said that, at one point, “Willie walked by her and farted in her face.”
Burns then “confronted him about the fart and Willie became agitated, telling her to shut up” according to a Collier County Sheriff’s Office report.
During the ensuing confrontation, Burns allegedly grabbed an eight-inch kitchen knife and threw it at the 53-year-old Butler, striking him in the stomach. Butler, who suffered a minor laceration, was treated at the scene by EMS personnel.
Pictured in the above mug shot, Burns was arrested for aggravated battery with a deadly weapon. She was booked into the county jail, where she is being held in lieu of $50,000 bond on the felony count.
Burns, a convicted felon, previously spent 21 months in state prison for aggravated assault with a weapon and battery on a law enforcement officer. 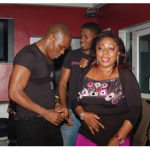