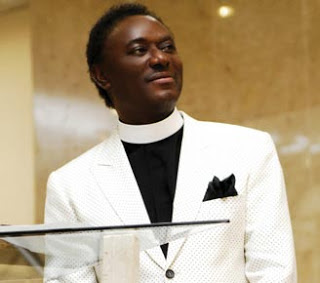 An interview with a security guard who worked for Chris Okotie and also accused him of stealing his woman. Read Interview below.When did you join Rev. Chris Okotie’s Household as a member? When didyou work there and for how long? How were you sacked?I joined Household in 2006. I was interviewed by pastor, got the job in 2009 and was sacked in 2010.What were you employed as?Security Guard

We learnt you were in a relationship with a lady, stephnora Nwamaka Boniface, also a former staff of OkotieThat’s true. She remains the mother of my only child.What was Nora (Amaka) employed as before she left the jobShe was working at the campaign house with other ladies there reporting to him directly.What does she do now?She is a modeling agent, they say.What’s your baby’s name, sex and age?Isabella AdejoHow old?My beloved daughter is two years and six months. She was born in Dafe Hospital in Ketu September 2010. I had to delete everything about Nora from my life. She almost ruined my life. I’m just trying to start again. I want to be seeing my child. That’s all I want no.How did you meet Nora?I met her in a café where she was working as a café attendantWhere and when?That was in Ketu, in 2006. WE went our ways in 2010 after she met “Baba Olowo”Who is that, please?Rev. Chris OkotieHow old is your woman?She is 27, by July 9 she will be 28What made you suspect she was dating Rev. Okotie?We fight and quarrel often. She is pretty and wants to keep appointment with too many men against my wish. She goes to him (OKotie) every now and then, frequent calls from him. He usually asks her to buy clothes, meet him in his church office to test and see how the clothes fits her.She will come and be discussing how Okotie has bed in his Church Office and a whole lot of things, bros e too much. My eyes opened when he instructed that I shouldn’t live with the mother of my child, a lady I have spent almost all my life with because he rented a two-bedroom apartment for her and my child.If I had not taken her to Household of God, would Okotie have come to collect her from my one room that we were living before?source – National Encomium 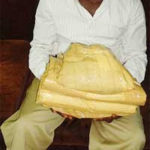 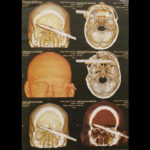