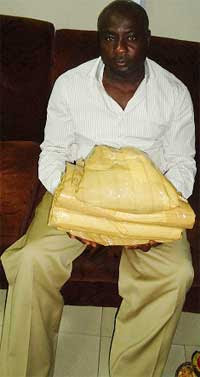 A Nigerian, based in South Africa, has been arrested by the  National Drug Law Enforcement Agency, NDLEA with 6.100kg substance suspected to be cocaine ,at the Murtala Muhammed International Airport, Lagos.
The 45-year-old suspect identified as Ozoh Hycenth Chukwuemeka, was apprehended during the outward clearance of passengers on board Arik Air to South Africa.
Explaining how Ozoh was arrested, the agency’s Airport Commander, Hamza Umar, told Vanguard that  the substance was concealed in a false compartment in his luggage.
When a search was conducted at the baggage checking desk at the departure hall, the substance was discovered to be cocaine,which street value was estimated at N50 million.
However, upon interrogation, the suspect, who claimed to have been living in South Africa for 10 years as a barber, admitted that the luggage was his. But he claimed the sustenance was given to him by a friend .
“A friend of mine in South Africa asked me to  bring a bag containing chemicals from Nigeria to South Africa for $3,000. When I  asked him if it was drug, he said it was just chemicals.
He paid for my return ticket. I never knew it was cocaine. I am only struggling to take care of myself with my barbing business back in South Africa.
If I had known that things will turn out this way, I would have rejected the proposal,” said the Anambra state-born suspect.
But his explanation, according to NDLEA Chairman, Ahmadu Giade, was unacceptable, saying that ignorance was not an excuse in law.
He added that the suspect would be charged for unlawful  exportation of cocaine at the end of investigation. 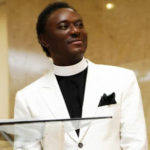