Menu
Two persons, one of them said to be a prophet with a white garment church, have been arrested by the Police in Lagos, following  the discovery of fresh human parts in their custody.
It was gathered that policemen attached to Ikotun division on patrol accosted two men at about 12: 30 p.m, Friday, with a Ghana-must-go bag. When they requested to know the content of the bag, one of the men bolted. When the bag was eventually opened, fresh human parts were found  inside  two containers.
The  recovered parts  included  five fingers, a human heart, liver, kidney and intestines, all concealed in separate plastics filled with water. The plastics were, thereafter, tied inside separate polythene bags and kept  in the carry-all bag.
Apparently to avoid suspicion, the suspects added soup ingredients such as salt, tomatoes and two pairs of bathroom slippers in a separate nylon bag which they placed on top of the human parts.
However, during interrogation, the arrested suspect identified as Kunle Olaide, claimed the bag was given to him by his friend who bolted when they were stopped.
On further interrogation, it was discovered that Kunle and his fleeing partner, slept in the  church the previous night.
Kunle confessed to be coming from the church located in Egbe area of the state when they were accosted by the policemen. His confessional statement led to the arrest of the said prophet of the church, Dare Akinrosoye. 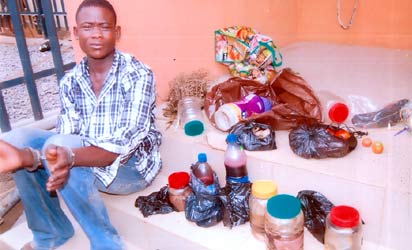 The suspect, Kunle Olaide and the human parts.
Sources at SCID said that investigation so far revealed that their victim was recently killed. But the purpose and circumstances surrounding the killing were yet to be ascertained. Police sources hinted that it was obvious the suspects were taking the human parts somewhere, assuring that investigation would unravel  the truth.
Contacted, the Lagos State Deputy Police Public Relations Officer, Mr Damasus Ozoani, confirmed the arrest, stating that  investigation was still on. 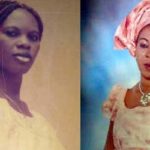 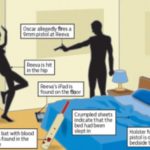