Two women – Temitope Abigeal and Temitope Remi – have been arraigned before a Chief Magistrate’s Court in Ebute Meta on a three count of conspiracy, assault and grievous harm.
Abigeal (26) and Remi (28), both choristers at a Cherubim and Seraphim church at Progressive Road, Ebute Meta, were said to have assaulted Hannah Okurabe (18) with razor blades at Abule Nla junction, a few metres away from the church.

The March 17, 2013 incident was said to be the result of an earlier fight over the church’s choirmaster, Joseph Unuigbe, a father of two, and is married to Folashade, who is also a member of the same church.

(Caution: Some may find the picture disturbing) 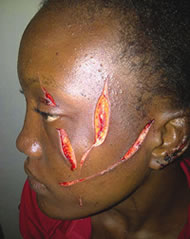 The defendants pleaded not guilty to the charges.”
Their counsel, identified simply as Mr. Chukwudi, made a bail application.
The prosecutor, Mr. Ishola Samuel, objected to the bail application, saying that the complainant was presently admitted to the Lagos Island General Hospital.
Samuel said, “If bail is granted, the defendants are likely to abscond from the court and that would prejudice the interest of justice. In view of this, I ask this honourable court to discountenance the bail application of the defence counsel.”
The Magistrate, Mrs. M. O. Tanimola, ruled that the charge was a bailable offence.
She said, “Bail is hereby granted the two defendants in the sum of N200,000 each in like sum. Defendants are to produce two responsible sureties who are gainfully employed and with evidence of tax payments to the state government in the last three years.
“The sureties must be relatives of the defendants and their addresses are to be verified. Case is adjourned to the April 17 2013 for mention.”
The suspects are said to be currently remanded at the Kirikiri Minimum Prison.