Search
Menu
Search
A US airline has been accused of racial discrimination after booting seven African American passengers from a flight.

Before the flight from Los Angeles to Dallas-Fort Wort, police escorted one couple off Spirit Airlines Flight 868 on Monday, accusing the man of being disruptive when he refused to give up his seat, according to the New York Daily News, but five more passengers who were all black were removed from the aircraft after they questioned police and the Spirit Airlines crew.

According to witnesses, the confusion began when a passenger’s seat got double-booked. An argument ensued between that passenger and a white flight attendant, who told him he was a threat and needed to leave. He refused, and police boarded to take him and the woman he was with off the plane.

When five other passengers got involved, they were kicked off as well.

Alexandra Wright, one of the passengers on board said “racial discrimination” played a role.

“I’m really humiliated just for the simple fact that you hear about this type of stuff happening in America, discrimination issues and stuff like that, but to actually experience it first-hand,” said Wright.

After arriving, witnesses on the flight told reporters the banned passengers were being disruptive.

Photo from the scene captured on cellphones. 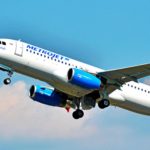