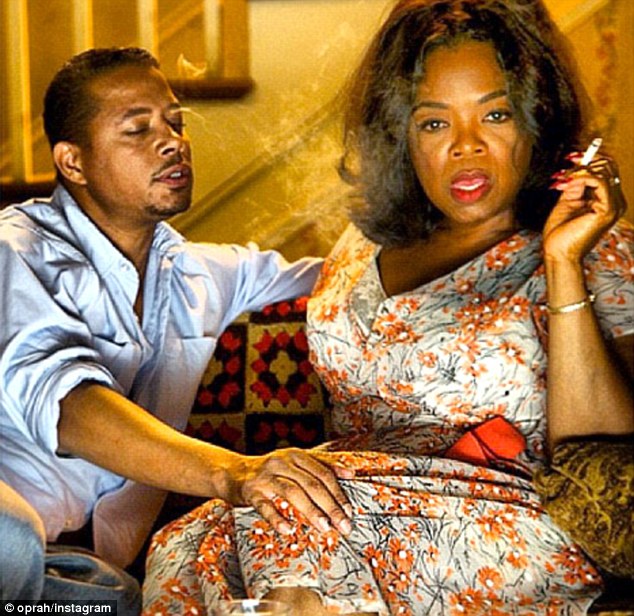 He shocked viewers last month when he cheekily referred to Oprah Winfrey’s chest as ‘tig ol’s bitties’ in an interview about the pair’s sex scene in their forthcoming movie, The Butler. And now the chat show queen responded to his comments as she sat down with fellow talk show host Steve Harvey. The 59-year-old makes light of the jest and says that she wouldn’t put it past a ‘misbehaving’ Terrence, even admitting that she was in fact the proud owner of a large bosom.

‘It was supposed to be like a little scene, and because Terrence Howard misbehaved it turned into a bigger scene, and then a bigger scene,’ ‘He’s a misbehaving kind of boy…. He was on the TV talking about my Breastses…. I do have big Breastses.’

Her comments come after Terrence said in a recent interview that Oprah should be seen as a sex symbol.
Talking about filming sex scenes with the chatshow host and philanthropist, Howard shared his appreciation of her ‘tig ol’ bitties’.
‘Oprah and I had such chemistry,’ he explained, in an on-camera interview with Movie Fanatic.
‘To be able to make out with Oprah and to have love scenes with her and those tig ol’ bitties… I mean she’s very, very, very beautiful.
‘She’s such a lovely, voluptuous woman… I mean that was wonderful. That was wonderful.’
Howard plays Oprah’s neighbour in the movie, which she portrays the wife of the lead protagonist, played by Forest Whitaker.