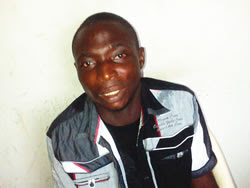 The Nigerian Security and Civil Defence Corps has arrested a driver, Olusegun Ajayi, for allegedly raping a 15-year-old housemaid in Arepo, Ogun State. The NSCDC authorities said the suspect had canal knowledge of the girl which caused her to bleed for two days.
Ajayi, however, said his act was not rape since the victim consented. The suspect, who claimed to be a devout Christian, said he did not know the victim prior to the incident.
He said, “On Saturday night, I was returning from a party and was about to enter my house when I saw the girl sitting outside. I asked her what she was doing outside late at night but she said she was working in a house not far away from my workplace and was sent to buy sweets by her employer.
“She said she was locked outside and that she had been knocking for hours but no one came to open the door for her. I then told her to follow me to an uncompleted building on the street. On getting to the building, we saw a mattress there which had been left behind by labourers. I asked her if she could sleep alone there but she said no.
“So, I went back to my house to get a wrapper and a pillow. Although my wife was not at home, my mother-in-law was around. So, I left her with my children and told her I would not be coming back that night.”
Ajayi, who claimed to be a father of three, said on returning to where the victim was, he laid beside her and began to caress her.
He said the victim did not resist his attempt but requested for money before she would allow him to sleep with her.
“I don’t know what came over me but I found myself touching her and she did not resist. Rather, she said I should pay her N10, 000 for sex and I promised to give it to her the following day. However, a few minutes into the sex, she started bleeding profusely which scared me,” he said.
The indigene of Lagos State said he went back home to get drugs as well as toiletries which he would use to stop the bleeding.
He said when it was daybreak, he set out for work but was summoned back home after which the employees of the victim accused him of rape.
“I was on my way to Iporni in Lagos when my wife called me that people were asking of me at home. When I returned home, residents just started beating me before handing me over to the civil defence,” he said.
In a desperate plea to the civil defence authorities, the suspect said he did not know that the victim was a minor. He added that his predicament was the handiwork of the devil.
“I have three children, including a daughter. I would never have touched that girl if I knew she was 15. I am a devout Christian and I am a responsible man. The devil preyed on my weakness and I promise never to do such again,” he said.
A source at the NSCDC, who craved anonymity, said the victim was taken to hospital and that the bleeding had stopped.
She also said that investigations were ongoing and that medical report would determine what happened.
“We believe that the victim was not only raped but the suspect must have done something to her because she lost so much blood. Once the medical report is out, we will know the next line of action,” she said.

Hottie Of The Day – Marc Jacobs