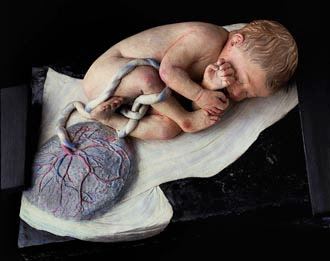 Mrs. Chidera Okereke who was recently delivered of a baby boy in a hospital located in Mafoluku area of Lagos State, was waiting outside the hospital for her husband who had gone to source for money to settle her bill when a man who happens to be one of the collectors of the human part, Segun, approached her with an offer to help her settle her hospital bill in exchange of her baby’s placenta.
“Madam, I can help you raise money to pay your hospital bill, if you can give me your placenta”, these were his exact words of the human part buyer. “
He claimed that one of the nurses directed him to come and meet me because I was in need of money to settle my hospital bill”, she said. ‘It was then that he told me that he is a placenta collector and that he would pay as much as N500, 000. I thought he was joking till he brought out his cheque book, it was at that point that I started shouting. He ran away before people started gathering. He claimed that he is a regular visitor in the hospital and used to deal with nurses but in recent times, the families demand their placenta after delivery”, Chidera narrated.
Another Patricia who is a nurse also narrated her ordeal with one of the placenta collectors. She claimed that she was offered N2.5million to supply placenta to a certain landlord who lives close to the hospital arround Osohdi. She said,

“He is popularly known as Baba Saheed and owns a house few blocks away from the hospital. One day, he called me and asked me if he can buy placenta from the hospital. He promised to pay N1.5million for each baby’s placenta. I was shocked because that was a lot of money.

I told him that I was not interested and he increased it to N2.5million and I still refused. To convince me, he said that there were so many places he could get supply but decided to try me since so many women were giving birth in the hospital.

On a second thought, I drew the attention of the doctor who invited him over. He threatened to arrest him but later relented when Baba Saheed prostrated and started begging for mercy. He claimed that he got the contract from a big company.

Since then it is a matter of policy that every pregnant woman must go home with her baby’s placenta after delivery in the hospital where i work”.

Some of these placenta collectors claim they supply the placenta to cosmetic manufacturing companies. But the question is, why do they  do it secretly? do we manufacture cosmetics in Nigeria?
People strongly believe the placenta is used for evil purposes. Therefore, it is advisable every woman demands for her placenta or ensure it is properly disposed by the hospital workers, in order to be on the safe side. Not many nurses or doctors will reject money offer in exchange for the placenta of their patients.