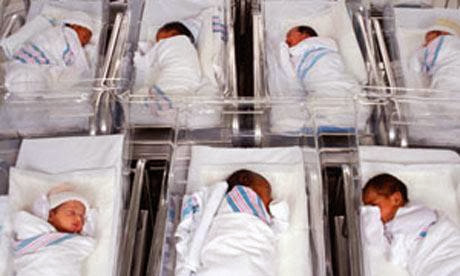 According to News Agency of Nigeria, NAN, five gunmen, suspected to be ritualists yesterday (Sunday Nov. 17) invaded a government owned hospital in Ado-Ekiti, demanding for new born babies.
NAN reports that the gunmen who were said to be numbering about five, arrived at the hospital at about 1.00am demanding for a day old babies, and beating up staff who could not give satisfactory answer.
A senior health officer, who pleaded anonymity, said that the armed men invaded the hospital located along Irona area at about 1.00am and suddenly began molesting medical officials on night duty.
According to the officer, the invaders, who were fully armed, were rhetorically demanding for the whereabouts of a particular baby, said to have been delivered earlier in the day.
“They got more annoyed when they were told that no baby was available in the hospital as at the time they came, it angered then the more and they went berserk”, the officer said.
This development, angered the men who beat up the hospital staff and injured some of them. “As a senior person on duty, I tried to convince them that all new born babies have been discharged from the centre in the last couple of days, but they refused to be convinced.

“This angered them the more and they descended on the staff beating us, some of them were busy ransacking the place in search of babies,” the source said.

When contacted, the Chairman of Ado Local Government, Mr. Tope Olanipekun confirmed the incident, saying “this is a new twist to crime in the area”. Olanipekun, who claimed to have visited the hospital to see things for himself, described the incident as “highest point of callousness on the part of the perpetrators”.
“As I speak, the incident actually happened and I want to assure you that we are taking step to forestall a recurrence.”
The chairman said that he had already ordered that night duty be suspended in all the hospitals in the council, pending when tight security measures, which would include fencing of all health centres be taken.
The State Police Public Relations Officer, Mr. Victor Babayemi, ASP, who was surprised at the development, however said the incident was yet to be reported to the police command.