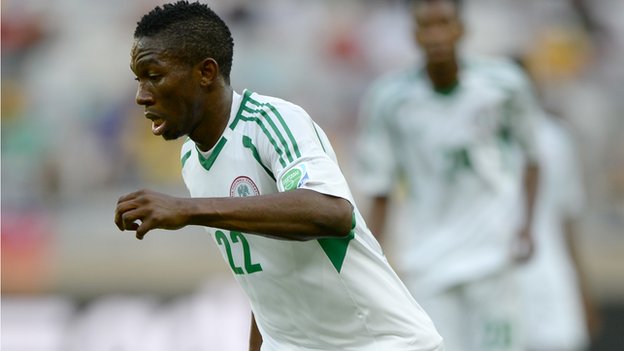 Kenneth Omeruo may well be Chelsea’s best kept secret. When he walks along the streets of Abuja, in Nigeria, he is mobbed by fans but to meet up for our interview in London, Omeruo travelled on the tube and was not recognised once.
The 20-year-old defender played in this year’s Africa Cup of Nations final, marked Luis Suarez at the Confederations Cup and is almost guaranteed to start for his country at next year’s World Cup in Brazil. But at Chelsea he is still waiting to make his debut.
Not that the level-headed youngster is getting frustrated. For now, he is just enjoying working with some of his heroes.

“I get a lot of messages from Nigerians asking me how is Michael Essien? How is Samuel Eto’o? Have you spoken with them?” Omeruo told BBC Sport.

“These are players that fans adore in Africa. And training alongside the big names, the likes of [Frank] Lampard and [Fernando] Torres is really, really good. I get to test myself and find out if I’m really ready.

“Every player jokes with everyone, it doesn’t matter how old you are and that’s important for a young player.

“Recently I was with Essien at his place, I met his family – it’s really nice outside football to get some advice from the other senior players.”

Omeruo signed for Chelsea from Standard Liege in January 2012 and immediately went on loan to Dutch top-flight side ADO Den Haag.
Then only 19, he impressed enough in the Eredivisie to win a place in Nigeria’s starting line-up at the Africa Cup of Nations and it turned into a wonderful tournament for the Super Eagles.
They won the trophy for the first time since 1994 and Omeruo was one of Nigeria’s key players, especially in the quarter-final, when he kept Didier Drogba quiet in the 2-1 victory over Ivory Coast.
A shoulder injury has delayed his progress this season, but the centre-back is now back to full fitness and has his sights firmly set on the World Cup.

“Our aim with Nigeria is to get to the semi-finals in Brazil and try to win something,” he said.

“We don’t want to be among the teams that just want to qualify, we want to actually get to a stage that would actually shock people.

“There’s a real confidence, the players are young and we’re like family thanks to the coaches and the way things are done. We really have unity.”

Omeruo made his comeback from injury in the crucial second leg of Nigeria’s World Cup qualifier against Ethiopia and helped keep a clean sheet in the 2-0 win which gave Nigeria a 4-1 aggregate victory.
Nigeria’s Kenneth Omeruo (left) tries to tackle Ivory Coast’s Didier Drogba
Omeruo came up against some of the biggest names in African football at the Nations Cup including Didier Drogba.
It says a lot about how highly he is rated by Nigeria coach Stephen Keshi that Omeruo started the match, despite not playing any first-team games for Chelsea.

“I never expected my career to go as quick as it is now,” Omeruo admitted.

“I thought that maybe by the time I got to the stage of playing at a World Cup, players like Essien and Cristiano Ronaldo would have retired.

“But I’m really happy with the way my football career has developed and I just have to concentrate and keep working hard. I’m really looking forward to the World Cup.

“We don’t mind who we get in the draw. We’ve shown we can play well against the best teams.”

Omeruo has been linked with a loan move in January and clubs in the Premier League and the top half of the Championship are said to be interested, but he is determined to try to win a place in Chelsea’s first team.

“I haven’t really spoken to manager Jose Mourinho about it but I just have to give my best in training and hope that he recognises it,” he said.

“For now I just want to focus and see if I get a chance to play for Chelsea and then when it comes to January I’ll see what the options are.

“I’m hoping to get into the team and start playing because the World Cup is just around the corner.

“Mourinho has a great impact on the players, he makes you want to play your best and value an opportunity when it’s given to you. He’s a great coach.”

If 2014 goes as planned it won’t be long before Omeruo is being recognised all over the world.