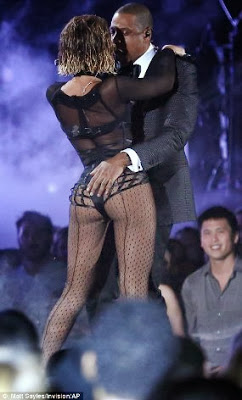 NY Post writer Naomi Schafer Riley has slammed Jay Z for being on stage and allowing Beyonce booty shake for all the men at the  2014 Grammy Awards.

Riley summed it up by asking:

“What do you call a man who stands there smiling and singing as his scantily clad wife straddles a chair and shakes her rear end for other men’s titillation?”

Despite what Riley thinks, the couple isn’t “suggesting” anything about how modern couples should behave. They are performing—for money—and giving fans a glimpse into their own lives, not our own.

If you don’t want to see Beyoncé writhing on the stage, or Jay slapping her ass, Ms. Riley, I have a simple fix for you: don’t watch…calling Jay Z “a poor excuse for a husband” because he “allowed” (uh, WUT?) his wife to perform in a manner that she has always performed seems like a bit of a stretch. Something tells me that Riley has never seen a Beyoncé performance, if she had, she wouldn’t be surprised by the Baddie Bey‘s Grammy chair dance which, to be honest, wasn’t as“sexy or dope as her other performances.

Find Riley’s article when you continue! If you haven’t seen their performance, see it HERE

This is how Riley explained her opinion:

”I’m certain if I look through enough Jay Z song titles, I’ll come up with the right name for his role in Beyoncé’s performance at the Grammy Awards Sunday night. Rhymes with Goodyear. . . ? Well, how about I just call him a poor excuse for a husband.

For years, these award ceremonies have pushed the envelope; Beyoncé’s booty-shaking was certainly no worse than Miley Cyrus’s twerking or any number of other performances by Madonna, for instance. But there’s something particularly icky about doing it while your husband looks on approvingly.

“Honestly, I didn’t want to watch Jay Z and Beyoncé’s foreplay,” says Charlotte Hays, author of “When Did White Trash Become the New Normal?” Indeed, the happy couple seems to have completely blurred the line between what goes on in their bedroom and what happens on national TV. So much for the woman that Michelle Obama has called “a role model who kids everywhere can look up to.”

READ Beyonce’s Poem To Michelle Obama on her birthday HERE

“It wasn’t surprising to see Jay Z, looking pleased at his wife’s hyper-sexualized exhibition on stage.” After all,“he’s made a living singing lyrics that call women ‘bitches’ and ‘hos,’ so we shouldn’t be surprised that he objectified his own wife on stage.”

It is a little bit surprising, though, coming so soon after Beyoncé contributed to the recent feminist manifesto, the Shriver Report. When she complains that “gender equality is a myth,” one wonders to what extent her consent to sell sexuality has contributed to the problem

The sophisticates will say that what we saw Sunday were just the long-established stage personas of Beyoncé and Jay Z; why should their marriage change that?

Well, for one thing, the happy couple have invited audiences to admire their adorable family, with dad even joking about his daughter’s sippy cups when he accepted an award on Sunday. So they’re suggesting to audiences that this kind of public sexual behavior is compatible with a loving modern marriage.”

What do you call a man who stands there smiling and singing as his scantily clad wife straddles a chair and shakes her rear end for other men’s titillation?