Professor John the Returning Officer for Rivers State is causing a mild drama as he seems unable to read what he wrote.

Professer Jega told him ealier to read from the original result but he said he couldnt read from it cos of his eyes.

The man brought out his phone to use as a flash light and still couldn’t read the figures.

A bigger phone was brought to him (Iphone 6) and he was stll having difficulties. A Flourescent torch was now give to him and he was still finding it difficult.

At some point, Jega asked him

Prof, i told you to read from the original script

And the professor replied:

I am reading sir

Yes i know you are reading but not from the original INEC master sheet.

I read under special condition

If you cant read it, i can appoint someone to read it for you.

Jega now asked him who wrote the results for him in his other sheet…and he answered that he did.

SO how come, he couldn’t read what he wrote?

Well after much laughter and drama….betweeen that police officer behind JEGA is a clown…does he not know that this whole thing is televised to the world?

Professor John finally with the help of the fluorescent bulb, read out the results. 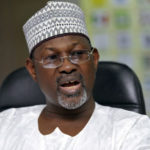