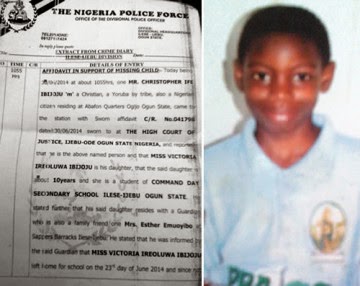 PUNCH Metro learnt that while the school management launched a search for the JSS 1 pupil, they came across a pile of bones in her school uniform two weeks later.

Her school bag, foot wares and books were said to have been found beside the bones in a bush around the school compound.

But the victim’s father, Mr. Christopher Ibijoju, insisted that the bones were not that of his daughter.

Christopher, an IT engineer, said that it was impossible that within two weeks that his daughter went missing, she would have decomposed to the level that no flesh could be found.

He added that despite the heavy rain that fell in the area during the period, the bones he saw were very dry and disjointed.

Our correspondent learnt that the victim, who stayed with guardians, Mr. and Mrs. Emuyibo, had gone missing on June 23, 2014, after she did not return home from school.

Her father, who lives in the Ogijo area of the state, said he got a call from Mrs. Esther Emuyibo, on Tuesday that his daughter did not come home on Monday.

“My daughter stayed with the Emuyibos and I usually send them money for her feeding and upkeep. She was formerly staying with a teacher in the school, who found another job and asked us to keep her with them.

“We never had any problem with them. On Tuesday, June 24, 2014, Mrs. Emuyibo called me that my girl had yet to return from school.”

He said he went to the school the following day, where it was also confirmed by the school authorities.

The management of the school, the parents and guardians were said to have organised a search party to look around the school. They reportedly did not see her throughout that week.

Christopher said he also went to the Ilese Police Division to report the incident.

“The first Monday in July, the school administrative officer called me on the phone and said I should come over to the school because he had seen something very terrible. He did not disclose what it was on the phone.

“When I got to the school, they told me my daughter had died. They took me to a place where we saw a pack of bones in her uniform. Although her school bag, books and shoes were there, I told them it couldn’t have been my daughter,” he added.

Our correspondent learnt that it was at that point that the school management disclosed that the victim had followed her friend, who lived in the barracks, to her home on the fateful Monday she went missing.

PUNCH Metro gathered that the duo slept in the barracks that night, but as early as 6am, the victim was asked to hurriedly leave because her friend did not inform her parents that she was bringing in a visitor.

It was learnt that she did not report in the school that morning.

After the bones, which Christopher vehemently rejected as his daughter’s, were found, our correspondent was told that the guardian, Mr. Victor Emuyibo, was arrested by the police.

He was said to have been transferred to the State Criminal Investigation Department, Eleweran.

The victim’s father explained that the bones were taken to the Olabisi Onabanjo University Teaching Hospital for forensic test.

He said, “The bones were packed in a nylon bag; they were disjointed. They were taken to OOUTH. A professor in the hospital, who examined them, said they could not be less than six months old. He, however, suggested a forensic test which requires N1m.

“The police said they don’t have budget for it and I also don’t have the money. So, we don’t have any report on it as we speak.”

She said this had been confirmed by spiritualists, adding that they had continued to pray and hope that she would return home.

She said, “I know that my daughter is still alive. We appeal to the school management to use their power to find out where she is.”

When contacted, the Commandant of the school, Captain Abubakar, said he was not aware of the case.

However, the immediate past commandant of the school, Lt. Col. Aliyu A.B. confirmed the incident and said the school had handed over the case to the police.

He said, “The matter is with the police. Before I left the school in December, 2014, the police arrested the guardian of the girl and detained him for some time and took the statements of everybody involved in the case.

“They also invited everybody involved in the matter and they were taken to Abeokuta. The cantonment commander was also involved and we did our best.”

He refused to talk over the phone and when our correspondent offered to come to his house, he also rejected it.

The Ogun State Police Public Relations Officer, Muyiwa Adejobi, said he would get back to our correspondent on the matter, but had yet to do so as of press time. 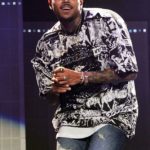