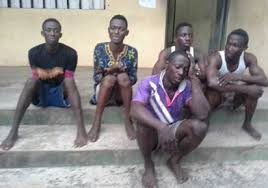 The 21-year old victim who was said to hail from Ekiti State but lived in Isara was said to have been lured to the shrine by a herbalist, Femi Awise, who is currently on the run.
Awise, a native of Isara lives in Jabata area of the town. Meanwhile, five suspects have been arrested by the police in connection with the murder, which include one of Awise boys.
The suspects are commercial motorcyclists (okada riders) who conveyed Morenikeji to the shrine. They are Adeyemi Ademolu, an apprentice of Awise, Omolaso Taiwo, Lateef Ali, Akinyemi Dare, and Sokoya Wasiu.

The shrine which was made with corrugated iron sheets in a cubicle form, contained boiled and smoked human parts.

The boiled human parts, including liver, intestines and spleen in earthenware containers, was on a table and a well-laid arm chair, covered with cloth.

There were also bottles of palm oil and other liquid forms littering the floor, while knives and plates were also found inside.Near the shrine was a small kitchen where something that looked like the victim’s heart was being smoked on fire outside.

A few metres away from the shrine were also decomposing legs of the victim dug out of the shallow grave where they were buried but the head of the victim and other parts such as breasts, hands, and vagina, among others, were not found.

The state commissioner of police, Valentine Ntomchukwu, who led a team of newsmen to the shrine located inside the forest, disclosed that the 21-year-old victim who hailed from Ekiti State but lived at Isara, was lured to the shrine by a herbalist, Femi Awise, who is currently on the run.

Ntomchukwu said the ritualist-turned cannibal is a native of Isara who lived at Jabata area of the rustic town.

He said investigation had commenced to unravel the circumstances that led to Morekeji’s murder and the motive behind it.

Ntomchukwu said the shrine was discovered through discreet investigation by his men, saying five persons, including a motorcyclist that took the victim to the shrine, had been arrested in connection with the murder.

“I would not know what would make some people to brutally cut down a girl in this manner. Five suspects have been arrested and investigation has commenced, we will leave no stone unturned to get the other fleeing suspects.

The shrine where the heinous crime took place.

“I am appealing to parents that it is not only enough to send their children to school, but they must do follow-up on them.”

During the commissioner of police’s visit to the scene, residents of Isara, Eposo and Ode Remo thronged the shrine of horror to catch a glimpse.

The motorcyclist confessed that he took the lady to the area but denied ever being aware of the existence of the shrine.

He said while conveying the victim to the shrine, she spoke with the said Awise twice on her mobile telephone, giving her direction.

“I was shocked because I never expected this kind of horrible and brutal thing exists here,” Soyemi said.

The victim was declared missing since Saturday, June 7, and it was those who saw her on the day she was being conveyed to the shrine by the Okada rider that gave the information, which led to his arrest, and final unravelling of the shrine.