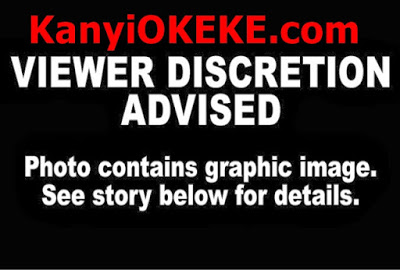 According to the person who posted the picture, the beheaded man is Marcel from Umuduno agbiligba Nanka in Orumba Local government area of Anambra state

He was beheaded Midnight on June 13th [that is early morning June 14th 2015] and same thing also happened 3 months ago.

According to Mr Poster, the killers stormed the man’s house at 1am and cut off his head. They were  about to run away with the head when the man’s son suddenly came out and attacked them.

They ran away and abandoned their motorcycle, the man’s head and some documents….Peep the man’s head when you continue, ***Viewers Discretion Is Strongly Advised***

The said documents are currently with the police and they have refused to disclose who’s name is on them.

Wow this is scary, i guess you dont even want to imagine coming outside and seeing your dad’s head like that.

Could this be the work of ritualists, enemies or what?

If ritualists now go directly to people’s houses we are in trouble….what do you guys think?