Menu
Rapper, poet and performance artist Mykki Blanco has disclosed his HIV status. He wrote on his Facebook page that he is HIV positive.

“I’ve been HIV Positive since 2011, my entire career. Fuck stigma and hiding in the dark, this is my real life. I’m healthy I’ve toured the world 3 times but I’ve been living in the dark, its time to actually be as punk as I say I am.”

“It’s just today for everyone else knowing but its been 5 years for me, meds, garlic, limes, yogurt lol world travel. I just cant be an image living in fear having people call me brave and it being a lie.”

His real name is Michael Quattlebaum, Jr and at times has identified as transgender. He has long been active in the fight for LGBT rights and told fans that he was arrested in Portugal a year ago for being gay, and he has been outspoken against Russia’s “gay propaganda” laws. His most recent release was last year’s Gay Dog Food. He announced that a new studio album is in the works too.

In a response to a fan’s comment, Blanco suggested that this “coming out” may alter his career, maybe against his will.

“The music industry ain’t gonna like i admitted this, so if a curator could help me move more into the art world that would be awesome.”

The latest CDC estimates of new HIV infections in the U.S. alone show that an estimated 47,500 people becoming newly infected with the virus in 2010. Anyone bringing awareness to this, especially in the public eye further reduces the stigma and shows that this is still a serious health issue. 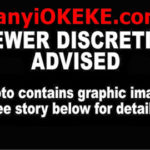