Menu
Nigeria put behind its defeat in the opening match of the 2015 FIFA U-20 World Cup when it mauled Korea DPR 4-0 today at the Stadium Taranaki, New Plymount, New Zealand.

After weathering a tight first-half, An Ye Gun’s side went to pieces after the break as a quick-fire brace from Saviour Godwin undid all that good work. A fine final two goals secured al three points for Nigeria and put them back in the mix for qualification from Group E.

Captain Musa Muhammed looked to lead by example as the struck a thunderbolt of a shot onto the inside of the post from 25 yards, for which keeper Cha Jong Hun was only an airborne spectator.

From there, though, Korea DPR improved for a spell. They contained the threat of Nigeria while had their occasional forays forward, however looked ultimately blunt in attack. The Flying Eagles looked more menacing as the half wore on.

Taiwo Awoniyi and Bernand Bulbwa threatened, before a Muhammed free-kick and Awoniyi follow-up brought out a superb double save from Jong Hun in a half where he was busy, but rarely tested to his limits.

The second half saw all that change, as the Korea DPR goalkeeper spoiled what had been an impressive display. His misjudgement to come challenge Nigeria’s Saviour Godwin for a Bulbwa cross saw the Asian side lose their foothold.

It only took Godwin three minutes to double his tally, after a lucky ricochet allowed Awoniyi to skilfully progress up the field before laying on to the FC Sports forward who coolly slotted through legs of defender and goalkeeper.

The third was a peach. A corner found its way out to Kingsley Sokari and his laser-guided shot from the edge of the area screamed into the top left corner. The final one wasn’t bad either, following a slick team move. Awoniyi and substitute Success Isaac’s exchanged passes sliced through the Korea DPR defence before the latter slammed home from a tight angle to reinstate the African champions’ last 16 hopes. 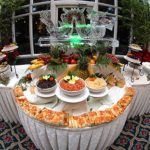