Popular dancehall singer, Timaya, has broken his silence after a lady, Omowunmi Lawal, accused him of hitting her sister’s car at Ikate axis of Lekki in Lagos State. 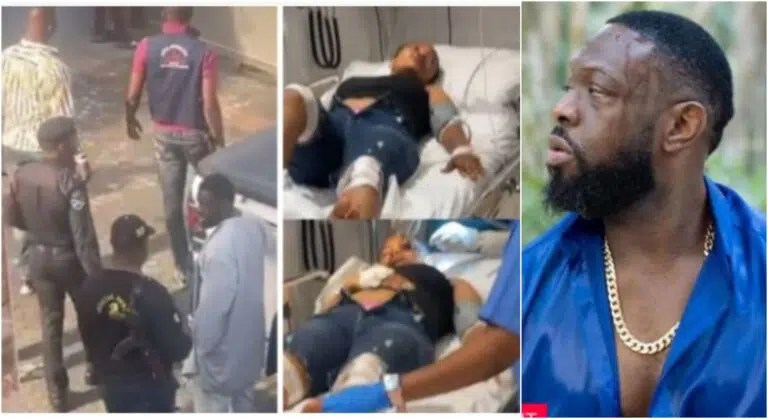 Timaya Accused Of ‘Hit And Run’

Taking to her Instagram page on Wednesday, March 2, Omowunmi had alleged that the singer hit her sister when she came down from her vehicle to confront him and thereafter zoomed off.

The lady also shared a video of her sister, who is in serious pain, bleeding from the face while receiving treatment at an undisclosed hospital after the incident.

Omowunmi alleged that when she texted him about the issue on Instagram, he read the message blocked her on the social media platform while pretending as if nothing happened.

A video emerged on Thursday showing the moment some security operatives were seen taking away the singer from a building believed to be his house.

Reacting to the allegations on his Twitter page on Thursday, the singer said he only hit the bumper of the lady’s car and was open to fixing it until he saw she was in the company of four suspicious-looking guys.

Timaya, who clarified that he drove away because of the four guys aggressively approaching his vehicle, insisted that he wasn’t arrested but only went to the police station to give his statement.

He said, “When I got back yesterday, I told my people to go back to the hospital to get things under control. So I went to the husband’s house early this morning; they already made a police statement and all that.

“I went to the hospital today, trying to make sure she’s okay come on I didn’t even know it was that bad, it was crazy.

“I didn’t even expect it would be like that or whatever. I wanted her number because it was just a bumper issue, the pain I feel she felt was even more than the car or whatever came on.

“How I go hit person run you know? How much is her treatment? It’s not about that it’s beyond money. It’s the act, why I go run when I saw four guys coming towards my car I gats stick out.

“I’m only here because they say I do hit and run, I’m not that guy, I can’t hit nobody and run.”

Confirming his side of the story, an Instagram user simply identified as Emolsmoji, who was at the scene, said Timaya asked her to call him so he could fix the car but she declined.

Rather, he said the woman held his mirror, ranting that he was going nowhere, adding that she was in the company of some guys that looked suspicious.

Sometimes you owe an apology 🙏🏽 pic.twitter.com/erWLfJjkpg

READ:  Bella Shmurda Falls Off Stage As Fan Drags Him Down During His Performance [Video]