Menu
Senator representing Bayelsa East and philanthropist Mr. Ben Murray Bruce of the Peoples Democratic Party, PDP, has pledged to donate his wardrobe allowance to the unpaid workers in Osun state and widows in his community at Akasa, Bayelsa state.

The media mogul said his action is necessitated by the suffering of the workers and their dependants over the inability of the state government to pay public service workers. Read his tweets below:

I, Ben Murray Bruce, will not sit down idly, while my fellow citizens die because salaries have not been paid.

As a first step, I am immediately donating my wardrobe allowance to unpaid workers in Osun state and widows in my Constituency

We are starting in Osun, but we will not end there. I will do as much to help workers who’ve not been paid in other states.

I call on all my friends and followers on Twitter and Facebook to donate NON PERISHABLE food items for these our brothers in need.

As soon as my wardrobe allowance is paid, I will divide it into 2. Half will be publicly given to the NLC Chairman Osun.

The other half will be publicly given to the head of widows association in my community of Akasa.

Each senator is entitled to a wardrobe allowance of N506, 600 per annum according to the Chairman of Revenue Mobilization Allocation and Fiscal Commission, Engr. Elias Mbam.

For about eight months now, the All Progressives Congress, APC led government of Rauf Aregbesola has not paid workers in the state. 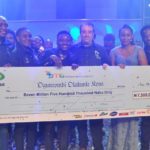