Connect with us
Pastor T.B. Joshua of The Synagogue Church of All Nations in this interview with The News revealed that God is the source of his power…you know the kind of power that makes him predict plane crash and bomb blasts after it has happened with edited videos. 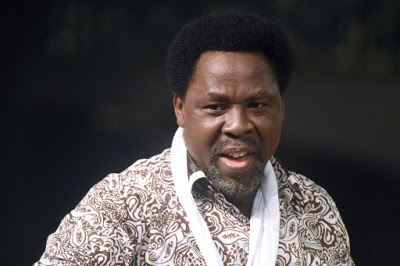 
Many people are confused and they keep asking the question, what is the source of your power? There are critics who keep saying you use demonic or occult power, while others think otherwise.

Rather, I should boast about what God is doing in my life. It is by this kind of trial that you know the true minister of God.

In the Act of Apostles, the early Christian preachers were being disturbed by the Pharisees, Sadducees and the High Priests in the Synagogue and the Temple in Jerusalem.

But among the elderly religious Jews was a man called Gamaliel, a doctor of the law. He quoted the example of Theudas who boasted to be somebody and who attracted over 400 men. He was slain and his followers scattered.

Gamaliele cited example of Judas of Galilee (not Iscariot) who rose in the days of the taxing. He attracted many people, but he perished while his adherents were dispersed. Those were in the days when Israel was under Roman colonialism.

Gamaliel, therefore warned the Jewish, elders. “Refrain from these men (Christian preachers) and let them alone. For if this counsel or this work is of men, it will come to nought. But if it be of God, ye cannot overthrow it, yet, haply ye be found to be even to fight against God” (Acts 5:38-39, King James Version).

So, if I am not of God, I will not survive this trial. But if I am of God, this trial will not destroy me. Trial is the soil in which faith flourishes. God sees his own people through trial.

Let me ask once again, what is the source of your power, the secret?

I said God. Jesus comes to give abundant life, while satan comes to kill and to destroy.
Are you saying that I use demonic powers to deceive all these foreigners you see around Synagogue here? Right now I am talking to you, there are over 400 foreigners from 10 different countries here. Are these people being deceived, destroyed or killed (as my detractors alleged)? If I have been using occultic power, the congregation here will not increase. If my mission here is not of God, it won’t stand just as Gamaliel said.
When people have their problems solved or they have salvation, they tell others.