Kanye West is finally trying to connect and be in touch with his roots on a trip to Uganda, Africa. According to XXL, this was inspired by “his viral trip back home to Chicago”. Kanye West arrived at Entebee International Airport on Friday, October 12, 2018, with a huge entourage. He is will be staying for a week at a five-star luxury resort.

He is confident that his next studio album will be a good one, that why he’s in Uganda planing for an exciting 9th studio album which will be released on November 23.

“The album is so good. I’m incorporating sounds you’ve never heard before and pushing concepts that people don’t talk about.

“We have concepts about body shaming, and women being looked down upon because of how many people they’ve slept with.”

STUDIO SET UP IN UGANDA ?

The rapper reportedly set up a make-shift studio which is inside a white dome offering a view of ba eautiful plantation.

In Uganda, Kanye West is taking care of music business and his family. 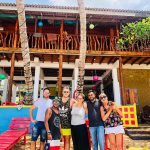