Ayodele Fayose, former governor of Ekiti state, has arrived the federal high court, Ikoyi, Lagos following the EFCC confirmation Friday that Fayose has been served with charges and trial notice.

The ex-governor arrived around 8:30am, in a White Toyota Hiace bus with an Abuja number plate: BWR-630AT, amid a tight security of officials from the Economic and Financial Crimes Commission (EFCC) and officers of the Nigerian Police Force.

The ex-governor is facing trial in connection with N1.299 billion and $5.3 million allegedly allocated to him by the Office of the National Security Adviser (ONSA) from N4.65 billion slush fund allegedly shared by ONSA.

But the ex-governor denied collecting $5.3 million from a former Minister of State for Defence, Mr. Musiliu Obanikoro.

He was said to have only admitted knowing Obanikoro and his associate, Abiodun Agbele, who allegedly bought six choice properties for him in Lagos and Abuja.

He was also said to have confirmed during interrogation yesterday that Agbele bought the properties for him. 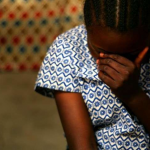