The Peoples Democratic Party (PDP) claimed the only reason President Muhammadu Buhari sang a Christmas song on Tuesday was to deceive Christians because he is seeking re-election ahead of 2019 presidential poll that is coming in 50 days time.

President Buhari sang the song alongside his Vice, Yemi Osinbajo and the National Chairman of the All Progressives Congress (APC), Adams Oshiomhole, in his office at the Presidential Villa, Abuja. (Read the report HERE).

Reacting to the gesture in a tweet, PDP spokesman, Kola Ologbondiyan insisted that Buhari sang Christmas song because he was seeking re-election. He wrote:

“Suddenly, 50+ days to the presidential election, where he is seeking a re-election, @MBuhari remembered it was Christmas and even sang; We Wish You A Merry Christmas #deception.” 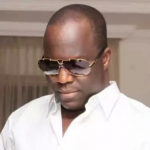 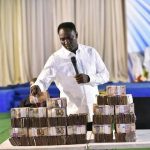