The controversial Senator representing Kogi West at the National Assembly, Dino Melaye is said to have passed a complete night on the floor outside the building housing the Department of State Security Services (DSS) medical facility in Abuja.

This is coming after the embattled senator who suffered an asthmatic attack and slumped after surrendering to the Nigerian Police was forcefully moved from the Police Hospital in Abuja to the DSS medical facility still within Abuja on Friday, January 11, 2018.

While the Police are insisting that the lawmaker is fit to stand trial, Melaye insists he needs more time to recuperate after suffering an earlier asthma attack, when he turned himself into the Police.

The Police wants Melaye to stand trial over allegations of his culpability in the attack of an officer in July 2018.

The senator has said will not enter the DSS medical facility, until he is told why he was moved from the Police Hospital in Abuja.

A Police source said the Force will ignore his feigned illness, and the senator may be taken to Lokoja, the Kogi State capital, any moment from now.

It was gathered that Senator Melaye refused to be admitted at the DSS medical facility and choose to stay put on the bare floor in the compound of the hospital because he claimed he has no case with the DSS. 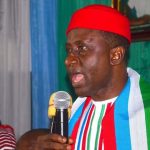 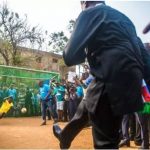