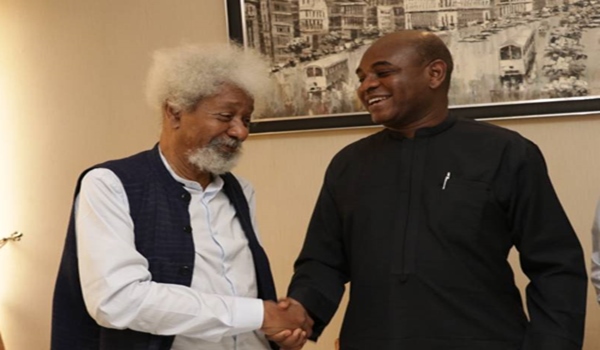 A few days ago, Wole Soyinka has urged Nigerians to reject the presidential candidates of the All Progressives Congress (APC) and the Peoples Democratic Party (PDP).

He stated that he was open to supporting an “alternative” candidate as both major parties are only worthy of “absolute rejection” as the country needs a new direction.

Subsequently to his statement that the country needs a new direction, the Nobel Laureate issued a statement this morning, endorsing the YPP candidate for president. The statement reads:

The nation has been brought to her knees. Internally, the blaring media testimony needs no augmentation. Beyond her borders, Nigeria is the tale of citizens designated pariahs of the global community for whom special dossiers are opened, and units of security agencies are specifically assigned.

Online transactions are programmed to reject basic usage once the word ‘Nigeria’ is inserted in the Data profile. There are few nation left, within or outside the continental borders where – no matter the codeword – a Nigerian ‘room’ has not been designated.

Her humanity litters the sand trails of the Sahara, it lines the Mediterranean sea-bed with the bones of a desperate generation, seeking ‘green pastures’. Lines from my poems have been appropriated and embossed as epitaphs on the tombstones of Nigerians washed up the isle of Catania and accorded dignified burials by total strangers, certainly paid more respect than Nigerians themselves consider due to their own humanity.

Other would-be migrants have been slaughtered by religious fundamentalists on the shores of Tripoli, while waiting for their precarious crossing on suicidal boats. Yet others end up as commodities in the slave markets of Libya and Mauritania, hundreds recently rescued and airlifted – credit where credit is due! – repatriated by government.

It was not always thus. Numerous Nigerians believe that it need not remain so. There is always a choice to be made outside any presumptuous orders – in reality associations guaranteed to perpetuate social disorders and the politics of inequality. This is not the thinking of any one individual but of a large section of this populace. If it were not, there would not have been a record number of nearly a hundred political groups aspiring to take over the reins of governance.

We do not need any instruction however to estimate that several of the aspiring groups are mere plants, raised to sow confusion. It redounds to the credit of a few individuals, including some of the candidates themselves, who embarked on efforts to winnow down their own ranks, then seek a consensus candidate as standard bearer for the battle against the two political behemoths.

They did not succeed, but that is no cause for despair. They still deserve the gratitude of Nigerians for their uniquely principled efforts. The CITIZEN FORUM – last heard of during the time of the dictator, Sani Abacha – was pulled out of retirement to join in their effort to arrive at peer consensus. The Forum worked peripherally with them. It made no attempt – I stress this – no attempt whatsoever to impose its own preferences, but utilized material from the deliberations of at least four such selection groups. It remained on the fringe, except on invitation. Our mission today is simply to present the result of that effort by Citizen Forum which, I am especially gratified to reveal, coincides with my own personal preference. The CF conclusion is obviously not binding on other groups or individuals involved in the exercise. May I take this opportunity to advise the public that neither Citizen Forum nor myself, belongs to any Third Force or other Consensus seeking councils by any other name. Please ignore any such attributions.

Over the past few months, we studied the careers, experiences and track records of most of the presidential aspirants, and most intensely those actually short-listed by the opposition parties themselves. Like millions of Nigerians, we watched the debates. I physically interacted with some of the acknowledged top contenders, in some cases several times. We participated in HANDSHAKE ACROSS NIGERIA, where some candidates presented their briefs. Among others, I delivered a keynote address. We watched television interviews. We have exchanged notes with highly respected international Civil Servants. The drive towards Consensus among these dedicated groups sometimes took the form of test questionnaires to the aspirants, including items such as: ‘Who among the contestants would you choose, if you did not emerge as the ultimate preference?’

There was nothing complicated about assessment parameters: mental preparedness, analytical aptitude, response to the nation’s security challenges, economic grounding, grasp of socio-political actualities, including a remedial concern with the Nigerian image in foreign perception etc. etc. not forgetting a convincing commitment to governance and resource decentralization – commonly referred to as Restructuring. The Forum rejected retrograde propositions of a political merry-go-round, which urge the electorate to choose this or that candidate in order to ensure “our turn” at the next power incumbency. Overall, the exercise was exacting but also – therapeutic. It proved yet again that there is over-abundant leadership quality locked up in the nation, and that it is a collective shortcoming that the political space has not been sufficiently opened up to let soar such potential. Well, to cite the Chinese proverb: a journey of a thousand miles begins with the first step.

Let me reiterate: there is over-abundant, but stifled leadership material, and there can be no excuse, now that that potential of high quality is being manifested, for constricting the political space in a population that is nudging two hundred million. And that statement is of course specially addressed to those who took part in this exercise, those who deliberated opted out of it, some of whom were assessed anyway. Such potential compelled us to exercise utmost rigour in what proved to be a most daunting exercise. The final determination however is – the flag-bearer of the Young Progressive Party – KINGSLEY MOGHALU.

I shall conclude with a somewhat interesting aside. I met Moghalu again on Monday morning, February 4th, and informed him of the Forum’s decision. During our discussion, I happened to ask him – what is the meaning of Moghalu. I was curious, because it had taken quite some time along the way for me to know to which ethnic group the name belonged. He replied, it means – “Evil Spirit, Leave me Be!” Then I asked him for his other names and he spelt them out: “Actually my full names are Kingsley Chiedu Ayodele Moghalu”. Eyebrows raised, I asked, How come, Ayodele? A piquant revelation resulted: “Oh, that came from Mrs. Funmilayo Ransome-Kuti. She was friends with my father. Mrs. Kuti was my godmother, and she gave me the name Ayodele”.

I was learning this for the first time. Moghalu’s CV is however in the public domain – his publications, record, and vision. The above is just a side-note that contains its own mild, thought provoking instruction, for those who care to examine the distractions of ethnic equivocations, and the rigid mind-sets and stereotypes imposed on products of circumstance.

That immediate task being now completed, Citizen Forum will now join forces with those who pray, “Evil Spirit, leave us be!” – at least those who subscribe to the belief that political elections are not a Do-or-Die Affair!