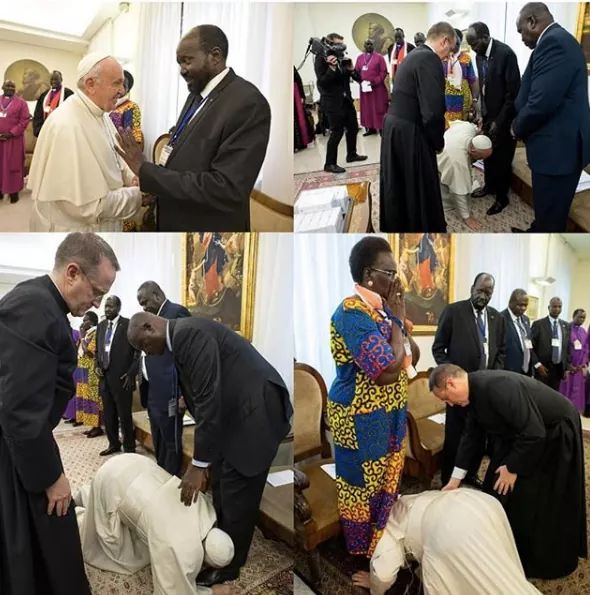 Pope Francis knelt and kissed the feet of South Sudan’s rival leaders, in an unprecedented act of humbleness to encourage them to stay on the path of peace.

At the close a two-day retreat in the Vatican for the African leaders on Thursday, the pope asked South Sudan’s president and opposition leader to proceed with the peace agreement despite growing difficulties.

He appealed to President Salva Kiir, his former deputy turned opposition leader Riek Machar, and three other vice presidents to respect an armistice they signed and commit to forming a unity government next month. The pope kissed the feet of all of them, one by one.

“I am asking you as a brother to stay in peace. I am asking you with my heart, let us go forward. There will be many problems but they will not overcome us. Resolve your problems,” Francis said in improvised remarks 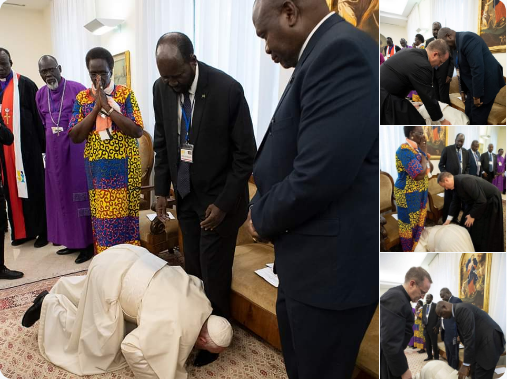 The pope usually holds a ritual washing of the feet with prisoners on Holy Thursday but has never performed such a show of deference to political leaders.

“I express my heartfelt hope that hostilities will finally cease, that the armistice will be respected, that political and ethnic divisions will be surmounted, and that there will be a lasting peace for the common good of all those citizens who dream of beginning to build the nation,” the pope said of South Sudan in his closing statement.

South Sudanese Vice President Rebecca Nyandeng Garang said Pope Francis’ actions moved her profoundly. She was very touched by his show of respect for her country.

“I had never seen anything like that. Tears were flowing from my eyes,” she said.

South Sudan, gained independence from Sudan in 2011 and in 2013, the country plunged into a bloody civil war, which left at least 400,000 people dead.

A military coup in Sudan on Thursday fueled worries in South Sudan that the toppling of longtime President Omar al-Bashir could derail the already fragile peace deal. 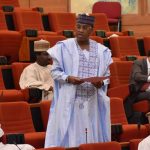 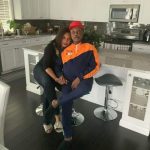