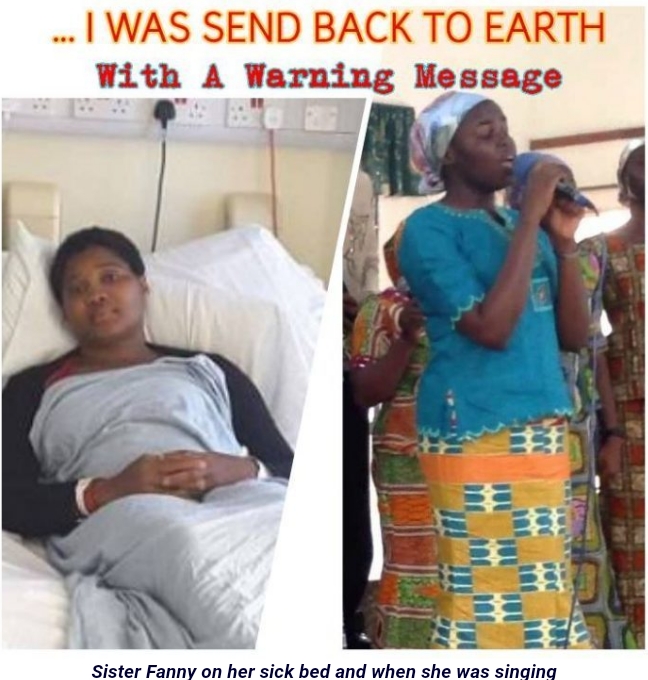 A member of the Deeper Christian Life Ministry identified as sister Fanny has made headlines after revealing that she died and came back to life with a message from God.

According to reports, Sister Fanny said she died after being sick for some time, went to hell and then God brought her back to life with a warning message for the Christians.

The story was posted in a Facebook group, “Deeper Christian Life Ministry members” by one Nathaniel T Nain Jr.

Read her full story below:

I WAS SENT BACK TO EARTH WITH A WARNING MESSAGE TO THE CHURCH:

My name is Sister Fanny, a member of Deeper Life Bible Church. I became sick — At a time, my condition became worse.

As a result of shortage of blood, the colour of my blood changed. I stopped breathing, which means I died — At that moment I began the journey to eternity.

Suddenly, I found myself standing between a broad and narrow way — At that place, I saw many people rushing through the broad way, while only three people passed through the narrow way.

Two angels from the crowd of angels confronted me with two books in their hands — One of the angels opened the book with the inscription “The Book of Life” — With speed he turned the pages of the book to the end but my name was not found in “The Book of Life.”

He opened the second book with the inscription “The Book of Death.”

He also turned the pages very fast: he paused almost at the end of the book and looked at me and called me by my name “Fanny” — you were given 3 gifts:

…but you did not do well with these gifts — Instead you devoted yourself to secular teaching because of material things.

The angel asked me , did you attend Church service last Sunday before you became sick?

He said, you were recorded absent; the angels that takes record of attendance took record by 8.00am when service commences — while you came 3 minutes after 8.

So you were late — Lateness is equivalent to absence.

Then he asked me, did you attend bible study the last Monday before you became sick?

I said yes, but you were late, he said you were mark absent — He asked me “did you attend the mid-week service on Thursday?”

I answered “No”, he then said that Sunday Service, Bible Study and mid-week service score 10% each — He said that my total score of attendance is 3/80%.

He asked me again, “how often do you go for evangelism?”

I said “very often” he then said “what about follow-up and visitation?” I told him that I do them very often.

He then asked me, “as a teacher if your student scores these marks, will you pass him/her?”

I said “No”, he paused for a while and said “what do you have to say about this?

By then I was shivering because I knew that I was in trouble. I saw below, the acceptable standard Daniel 5:27: 27 TEKEL; Thou art weighed in the balances, and art found wanting — Hebrew 12:28: 28 “Wherefore we receiving a kingdom which cannot be moved, let us have grace, whereby we may serve God acceptably with reverence and godly fear”

The other angel who had been silent said with a loud voice, ”You are unfaithful servant, take her to hell”

When I heard that voice, I was terrified— I wish I could disappear or escape but there was no-where to hide or escape — I wept bitterly before the angels, pleading for mercy. Unfortunately, their faces remained motionless — they were not moved by my tears and weeping.

….But as I continued crying and pleading for a second chance — the angel who was talking to me said “show her Hell.”

I saw many people who are crying bitterly in hell — 10 strokes of whip was given to me as a warning for being unfaithful servant — the whip was so painful that I was shouting instead of crying .

As I kept pleading for the second chance while weeping — the angel said to me “go back to the world and amend your ways” at that moment, I woke up shouting “fire, fire, fire — The heat of hell fire was so terrible that I couldn’t understand the pain

“Nnamdi Kanu Is An Ingrate, And A Frankenstein Monster!” – Asari Dokubo Reacts To Attack On Ekweremadu