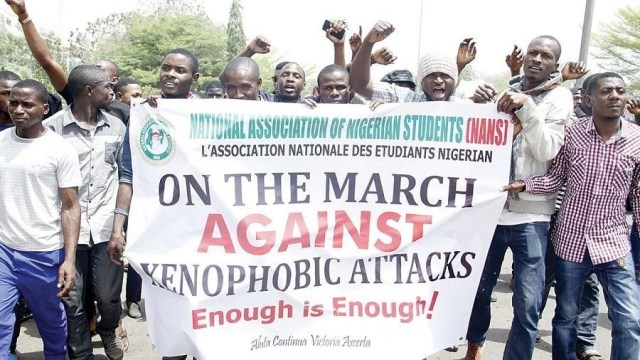 The National Association of Nigerian Students (NANS), has given all South Africans and their companies operating in Nigeria to shut down within seven days and move out of the country, following the increasing number of Xenophobic attacks against Nigerians in South Africa.

Akpan made the call at a press conference organized by the Chairman, National Diaspora Commission, Abike Dabiri-Erewa, in Abuja yesterday August 7th.

At the press conference, Akpan said enough is enough with the xenophobic attacks. According to him, Nigerians have tolerated the attacks enough and a decisive action against South Africans must be taken to show strength by the Nigerian government.

He said that the picketing exercise was peacefully carried with the hope that the government of South Africa and her citizens would end all forms of attacks on citizens of Nigeria and other African nations. He said:

“Behold, the killings have continued and has even assumed a more dangerous dimension. This worsening development calls for a swift reaction. Importantly, we want to call on Nigerians in South Africa to reconsider their stay in South Africa and return home.

“Having gone through the first phase without any remorse or practical action to end xenophobic attacks in South Africa, we wish to announce that Nigerian students have decided to take on South Africans same way they are doing to our people.

“We have seen the helplessness of the South African government in reining in their citizens and wish to condemn in unambiguous terms the continued pampering of those involved.

“Every nation has own internal crisis hence no citizen of other nation should be sacrificed for criminal activities of South Africans or any other.

“Since the economic prosperity of Nigerians can no longer be tolerated and their lives secured in South Africa, there’s no need also to condone the continued flourishing of South African businesses and her citizens in Nigeria.

“We therefore wish to officially ask all South African-owned businesses in Nigeria to relocate in the next seven days. We specifically want Multichoice, MTN, Stanbic IBTC Bank, Shoprite and others to close their businesses in their own interest within seven days.

“In the same vein, we request that South African nationals in Nigeria should return to their home country as we can no longer watch them enjoy peaceful living in Nigeria while our citizens in their country continue to pay with dear lives for no reason other than being resourceful and flourishing in their businesses and career.

“South Africans should henceforth leave Nigeria with all their businesses. Nigerians are not joking about it and we are giving seven days ultimatum for this action to be carried out. Diplomacy has failed”.

Dabiri-Erewa, however, appealed for calm from the Nigerian Students, stressing that the Nigerian government is working hard to ensure that the matter is resolved.

She disclosed that President Buhari will be meeting with his South Africa counterpart, Cyril Ramaphosa, to discuss how to end the attacks.

According to her, Nigerians are reaching a tipping point as the killings are increasing by the day;

“We are reaching a tipping point, we are getting to a point where Nigerians are getting really angry and they can’t take it anymore.

“It’s going to be one of the priorities that the Minister of Foreign Affairs would meet again with his counterpart in South Africa and review the early warning signal that was put in place, that has to be done while diplomatic Channels are being explored,”
she said.

“One more death again in South Africa… it is becoming unbearable for Nigerians, you don’t go there and come back with body bags so we just have to do everything we have to do, to ensure that it does not escalate to that level where we start picketing and destroying property… that is not who we are,” Dabiri-Erewa stressed

CULTISM: Governor Wike Sends Names Of All Rivers Lecturers To DSS For Profiling